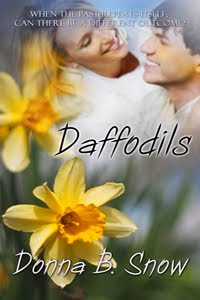 High school sweethearts...I think we all remember that perfect couple. Everyone just knew they would make it, they would be together forever.
I had friends in college who were like that - Diane and Patrick. They were perfect for each other. Started as high school sweethearts, and yup, 30 years later, they're still together.
But what about the ones that didn't make it...the ones that broke up and went their separate ways. How many of them realized later in life that they missed their one and only - let the love of their lifetime get away. Would they grab a second chance if they had it?
So here's the challenge. If you can name the hero and heroine, and tell me when they broke up, or who did the breaking up, I will have my daughter pick a number, between 1 and 20, say 3, and the third one to get it right will get a free copy of Daffodils. (I know you haven't read it, but the following excerpt will help you figure it out.)
Excerpt:

After dinner, everyone headed for their vehicles while Margaret smiled and waved her thanks. Once again, Lukas stood at her side, his shoulder brushing against hers as he smiled and waved alongside her as if they had both moved.

She took a deep breath and turned to him, studying his face as the last of the vehicles pulled out onto the street. Soft brown hair fell into his eyes, reminding her of the boy she once loved. She fisted her hand to keep from brushing it back for him like she had done so many times in the past.

Returning her look, Lukas took both her hands in his strong ones, smoothing her fist. He lifted a knuckle to her cheekbone, the gesture melting a small piece of her heart.

She had to remind herself his sympathy was ten years too late.

“I wish I could change the past, that things could have been different a long time ago.”

Margaret looked down at their hands and folded her fingers over his. She couldn’t deal with that discussion now…maybe ever. “We can’t change history. Ten years ago you made your choices.” She shrugged, holding herself stiff, her voice flat. “Let’s not dredge it up now. We were just kids.” She couldn’t go there. She would shatter if the wrong words were spoken. Dear Lord, give me strength. You promised not to give me more than I can handle, Lord. Well, I’m nearly there. Please…She turned away, blinking back tears.

Book Highlight - I Called Him Dancer

Just a new little something. I saw this book and couldn't resist sharing. What a wonderful story!

For a moment, Michael danced on top of the world, but one bad choice turns his life upside down. The once promising Broadway star now washes windows for tips and lives among the homeless. When his former dance partner recognizes him behind the fray of whiskers, shame drives him away from her. Angry at God and the world, the Dancer refuses to allow anyone into his life. When everything is stripped away, three things remain: faith, hope, and love. The greatest of these is love.

I Called Him Dancer is a story about how one woman’s enduring faith and unconditional love drives her to reach out to a homeless man who has given up on life.

Daffodils is coming next Friday!!!!

I just finished my final edits - Release date Friday 4/8/11! I am so excited.
Daffodils
coming soon from White Rose Publishing
Margaret Ellington and Lukas North have a history to resolve. But when the past repeats itself, can there be a different outcome?
Here's a little peek:
Whoever was banging deserved whatever came out of her mouth. Pushing hair out of her eyes, she snapped the lock and yanked the door open.
Margaret’s face froze. Oh Lord, help me.
Sky blue eyes stared back at her—Lukas North.
His lopsided grin would have suited a ten-year-old boy after getting away with some mischievous prank. Eyebrows raised, he lifted a cup of coffee from the crook of his elbow and held it toward her. Pink lettering on the cup showed the logo from the coffee shop around the corner. The bright morning sun set red-gold highlights aglitter in his hair while his eyes crinkled at the corners. A dimple dipped into his cheek.
Posted by Donna B at 11:12 AM 4 comments: