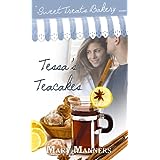 CHRISTMAS STORY EXTRAVAGANZA - Day 4
Every weekday (Monday through Friday) for the month of December I will spotlight a story here on my blog. Yes, this is 17 days of Christmas book browsing. And on Christmas Eve I will announce the lucky winner (at least two that I know of right now). The person who leaves the most comments throughout the month will receive their choice of any one of the books spotlighted. That's from me. Other prizes are being offered by the individual authors.
Well here's the next treat in my December lineup! Welcome, Mary Manners! I decided we all needed something a little sweet today, so I hope the shop is ready for a lot of new customers to pop by!
So here's a little nibble of this wonderful story...
Blurb:
Tessa, the youngest Spencer sister--and the most impulsive--rushes into the Mount Ridge crisis center bent on saving her brother-in-law. She's ready to handle Brent's abductor, with or without help. What she's not ready to handle is the effect policeman, Colin Phillips, has on her. Romance is the last thing on Tessa's mind. She longs for the adventure and fast-pace of New York City, not being tied to Mount Ridge and a man who insists she shouldn't be so impetuous. After all "independent spirit" is what Tessa does best! Colin transferred from the police force in Atlanta in order to find closure after the brutal murder of his younger sister. He wants a nice, safe future, not one filled with caring and worrying about another impulsive woman. His sister was naïve and unpredictable, and while Colin is drawn to Tessa's spunk and vitality, her willingness to rush into danger scares him. No way could he cope with another devastating loss. His heart must remain closed where Tessa is concerned. But God has His own plans...and His own way of changing hearts and cultivating love.
Excerpt:

“Mattie—Jason Sloane’s up there with Brent.” Tessa stepped forward and dipped beneath the caution tape. “Remember the threats Jason made last week when Brent tried to help his wife?”

“Yes.” Mattie paused as she approached the caution tape. Blue and red light washed over her. “But, Tessa, wait! You can’t just go in there.”

Undaunted, Tessa wiggled from Mattie’s grasp and pressed forward. Her heart pounded, and she shivered as the wind picked up and the spill of rain grew from a spit to a shower. The caution tape fluttered and danced in cadence to her nerves. Jason Sloane had fumed when Brent offered Jason’s wife the childcare job at the center, had said he wanted her home with their kids, not raising someone else’s. If Jason Sloane was up there, Brent was in danger. She couldn’t just stand there and wait for something to happen—for someone to help him. “Of course I can go in there…and I will.”

“Hold up there.” The cop holding back the line of spectators planted himself like a gigantic boulder, shoulders back, palms clasped tight at his waist. “Move back.” He thrust his head toward the tape. “Get behind it.”

“No.” Tessa sidestepped to dart around him, but, despite his size, he was just as agile and blocked her path. His gaze speared her as she crossed her arms and stretched to her full height. The rain made it difficult to see, and she wiped moisture from her eyes with the back of her hand. “Let me through.”

A flash of shock brightened his eyes as his jaw clenched. A burst of light revealed a shadow of stubble that covered his chin, and Tessa imagined he couldn’t be much older than she was. His hand clasp tightened and his shoulders flexed. The outline of a bulletproof vest beneath his navy blue shirt made Tessa’s heart stutter. For a fleeting moment, she felt as if she’d been swept up into the movie set of the latest blockbuster thriller. Things like this—cruisers on the lawn of the town square, cops in bulletproof vests—just didn’t happen in Mount Ridge.

“No one’s going into that center until we have the perimeter secured—not even me.” The cop took one giant step toward her, his gaze like daggers, and lifted the caution tape as he herded her toward it. “Now move back.”

A shout from the building echoed across the lawn, and Tessa’s head snapped up to see Jason Sloane leaning from the window of Brent’s office. He shouted into the storm, his voice slurred. She gasped.

Mattie’s shoulder brushed Tessa’s. “Tessa, do as he says.”

“Brent’s in trouble and Grace is sure to find out soon, if she doesn’t already know what’s going on. I can’t stand the thought of her so worried.” Tessa spun to face her sister. The dank odor of rain and decaying leaves filled her nose, and a rivulet of water drizzled down her back. “You can just stand around out here if you want, but I’m going to help him.”

“You’re not going anywhere but there.” The officer jabbed a finger toward the crowd. “Now move back and let me do my job.”

Indeed, the family that bakes together, stays together. These sisters define what true family is - standing together and beside each other through thick and thin (and I don't just mean batter).

Tessa certainly seems to have met her match in Sergeant Colin Phillips as she jumps right in to protect her extended family. And in turn, he endeavours to protect her and her sister from jumping in harms way. Sparks fly between Colin and Tessa even as admiration and respect grows.

The empathy and love in this family is a blessing to all those who come in contact with them, especially Colin.
How about you? Come on in to the Sweet Treat stories and see what I mean!
Posted by Donna B at 9:42 PM