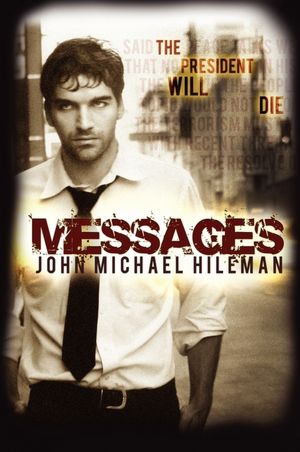 Today I'm thrilled to have John Hileman here, the author of Messages.


I've got to tell you, this is one author I'll be watching for! Talk about a book that hooks you start to finish!
Please, John, more stories, please!

David Chance can see messages in the sea of words around him, messages that warn him of future events.

Words are everywhere-- on labels, magazines, sign posts, t-shirts-- everywhere. And as much as David Chance would like to hide from them, he can't. Words keep leaping off objects around him, forming messages in his mind. But how is this possible? Has his brain suddenly taken an evolutionary leap forward, or are the mysterious messages proof of divine intervention?

Driven to answer a question he'd long ago abandoned, and stalked by the killer he's trying to stop, David risks everything to follow the messages to a dirty bomb set to go off in the heart of Boston. But can he trust the author of the messages to protect him from a terrorist who seems to know his every move.

It was a little after 1:30, and it was David’s odious job to meet with the lead producer and the on-line editor to work on a story for the 6:00 news block. David’s role was minor, write down the time-code marks as dictated by the producer, and log what he saw on the screen. It didn’t require a whole lot of concentration, so usually he found himself fending off waves of drowsiness. His creative mind was well suited for accomplishing large abstract tasks, but less than adequate at mundane repetition.


The editor cued the tape. The television monitor flickered and rolled and let off its familiar audio squeal. David logged the starting time-code as the producer began the pre-edit strategy, then leaned back in his chair, awaiting instructions.


He stared at the screen, then heaved a sigh and looked around. This is SO mind numbingly boring! Maybe I can find something to read. He scanned the room, and a notion struck him. His eyes drifted from a coffee mug which read, “Number One Producer,” to a sign on the wall, “Be All You Can Be,” to a monitor displaying the program logo, “In The Know.” From each source he drew a word and constructed a sentence. One Can Know. He smiled to himself; he hadn’t expected to come up with an actual working sentence.


Still bored, he made a second go. His eyes scanned the room and extracted words from the sea of text around him. Will from the Will & Grace poster, exit from the exit sign, needs from a posted letter to employees, and tape from a label indicating Reusable Tape Stock. The sentence solidified in his mind. Will exit needs tape.


The producer turned to David, interrupting his game. “Hey, Chance, could you go get me a tape from my desk. It’s marked...” He paused. “Know what, never mind. I’ll go. There’s something else I have to do anyway.” The producer stood and exited the booth, leaving David in stunned silence.


“What’s wrong with you?” asked the editor.


The editor shrugged and turned back to the video gear.


David sat motionless and stared. Did I just predict that? The incident replayed in his mind. I think I did! I predicted the future!


He shook his head. No. It was only a coincidence. It had to be.


David turned the little car down a side street and gunned the engine. Four more blocks and he would be on the Interstate, hopefully just ahead of rush hour traffic.


As he drove, the mysterious incident continued to nag at him. He wanted to dismiss the whole thing as nothing more than a fluke, but he just couldn’t reconcile the fact that the words had been there for him to string together, and his eyes were drawn straight to them. There was no premeditation. He wasn’t even trying to make a sentence. ––Still, it had to be a coincidence.


He scanned the sea of words zipping by outside his window. They beckoned to him from road signs, marquees, window signs... There were plenty of potential sources for a test, perhaps he could give it another shot. After all, a couple of bona fide failures would set his mind at ease.


He looked left through the wiggling rivers of water on his window. “Your One Stop Shop.” And right, at an old barn board. “On Sale Now!” His mind pulled out the words Stop Now! He hit the brake, and the car went into a skid.


The driver in the Mustang behind him laid on the horn, swerved out around, and gunned his engine. David, unable to pull his eyes away, watched the vehicle tear off down the road. As it passed through a green light, an eighteen wheeler ran the red and plowed into the little car from the side. Metal buckled, and windows exploded as both vehicles slid left and disappeared behind a row of buildings.


David sat wide-eyed, gripping the steering wheel, unable to catch a full breath. His heart pounded in his ears, his thoughts a flurry of panic. With a trembling hand, he pushed the door open and stepped out onto the street. Car horns competed with car alarms, and off in the distance a siren wailed.


But to David, it was all a hollow drone.

If I could make it more than five stars I would. What a fantastic story! The pace never slows down, just picks up speed all the way. And it's amazing how one little thing from the beginning is a huge tie into the end. Phenomenal! Very well done! He kept it all close to his chest and didn't give anything away until the end.

I was going to compare him to another inspirational suspense writer, but you can draw your own conclusions. John Michael Hileman can certainly stand out on his own!

Honestly, if you don't pick this one up, you're really missing out!

You can find more about John and his work at: http://www.christianfantasyauthor.com/