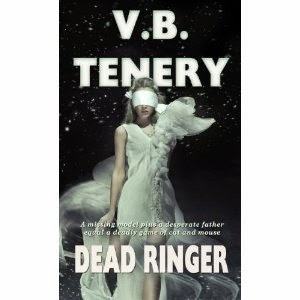 I have got to tell you, I LOVED THIS STORY!!!
V.B. Tenery is one author I will be watching for!

Mercy Lawrence is terrified. Bermuda airport facial recognition software has identified her as missing runway star, Traci Wallace. Despite Mercy’s protests, Traci’s husband, ex-CIA agent Thomas Wallace, is convinced Mercy is the mother of his ill six-year-old son. With only his son’s welfare in mind, he abducts Mercy and takes her to a private island to care for the boy.

But Mercy soon discovers there are men much more dangerous than a father desperate to save his son. Her doppelganger has made deadly enemies–a relentless team of killers who now want her dead.

When Thomas is lured into a covert mission to rescue a CIA asset and uncover a government mole, Mercy is left isolated and alone–and Thomas finds himself stranded on foreign soil with a compromised mission and a wounded agent.

Fighting against a rogue nation’s timetable for launching a nuclear strike, he has to escape Saudi Arabia alive and rescue Mercy and his son before assassins finish the job they started.

Want a little more? Here's a peek at the beginnings...

Mercy Lawrence wouldn’t have noticed the large man standing by the silver Mercedes except for the way he was dressed. Unlike the tourists on the sidewalk, he wore a light gray business suit and tie. Sunglasses hid the upper portion of his face, and the grim set of his mouth detracted from his otherwise handsome appearance. He stood beside the car’s open back door, arms crossed as if waiting for someone.

Not wanting to stare, she tore her gaze away. In jeans, T-shirt, and sandals, she blended easily into the vacationers along the boulevard. She’d spent the last five months in this wonderful country, recuperating from a head injury. Most of her memory remained intact after the accident, but dark recesses still refused to reveal their mystery.

But tomorrow, like a good soldier, she would return to Houston and report to her new job at Sabine Oil, the fulfillment of a goal she’d worked towards for the past six years.

The city’s main drag ran four lanes wide with a palm-tree-lined median, the sea on one side, shops and hotels on the other. A soft wind filled the air with the scent of sea kelp and brine, mixed with a light floral fragrance from the purple bougainvilleas hanging onthe walls along the walkway. Seagulls swept low over the water, looking out past the rolling surf for lunch.

She shook her hair loose from the confines of its ponytail clip and turned her face to the balmy sunshine—mainlining vitamin D. Her path took her within four feet of the parked car.
The man moved onto the sidewalk and grabbed her arm.

"Having fun, are we?" He spoke with a slight Scottish burr, the strange question more an accusation than a greeting.

She tried to jerk her arm away. "Let go of my arm."

His grip tightened. "I’ll just bet you’ve been living it up." His voice was harsh, his jaw tight.
No one intervened. Casual observers would think she knew him.

One hand locked on her arm, he shoved her into the backseat, slid in beside her, and slammed the door. His movements were so quick, so smooth, she had no time to struggle, no time to scream or put up a fight.

She swallowed the lump in her throat choking off oxygen. Women disappeared all too often on foreign soil, never seen or heard from again. "Who are you? What do you think you’re doing? Let me out. Now!"

He ignored her protests and leaned forward in the seat. "Airport, Fergus."

Review: This story grabbed me from the start and wouldn't let go! What a great story! Every free moment I had, my nose was in this story. I couldn't put it down unless I had to. From Mercy's abduction to her exoneration, this is a story with so many unexpected twists and turns it will keep you hanging on right to the end! And come meet the characters...from Thomas, the misguided, but loving father, to Fergus, the inflexible, stubborn scottsman, to Daniel, the sweetest, bravest little boy you'll ever meet Don't miss this one! It's a treasure!

How's that for a nibble??? And that's just the start! Here's where you can get a copy: