A Piece of Heaven & Precious Embrace


Wouldn't you just love to find a cozy little restaurant where you could enjoy a good dinner, good company, and good music? I mean good Christian music. A place where you wouldn't have to worry about anything, not even what the kids might hear if you brought them along. Well, this is the place. This is my dream. Come on in and visit A Piece of Heaven. I promise you'll enjoy it!

First we have Trina's story...


Trina Wembly dreamt of owning a Christian coffee house for years –a Godly place where people could enjoy a good meal, and entertainment that wasn’t offensive. A Piece of Heaven is that dream.
Jared Larou, the construction foreman who helps design and build the coffee house, is a wounded soul with a soft heart.
Once the coffee house opens, Trina and her partner, Laura, work day and night. From coffee in the morning, to gourmet dinners in the evenings, it’s a heavy load. Plus Trina performs most nights as the entertainer at the coffee house.


After working together and building her dream, Trina longs to be more than just friends with Jared, she just hopes that’s what God wants for her too.


Trina was on the raised platform in the corner.

Most of the tables were occupied. Must have been a good night, so far. Hopefully they’d had some downtime earlier in the day.

His gaze was drawn back to Trina as she plucked on her guitar. Seated on a stool, legs crossed, her green skirt covered all but her ankles. Long brown hair coiled in a thick braid was draped over one shoulder.

He’d love to run his fingers through it and see how soft it was as he unbraided the length. He sighed. He’d love to just sit with her and hold her hand, hold her as they talked about life.

She was so vibrant, so alive. Her eyes glowed with an inner fire as they roamed from one listener to another around the room. Her foot swung gently with the rhythm of the tune while the other rested on the bottom rung of the stool. Her fingers caressed the mahogany instrument in her lap, plucking out a warm, deep sound. Then she started to sing.

Words from what used to be one of his favorite hymns poured over him. Jared swallowed hard.

Trina glanced from person to person, seeming to connect with each one—until she looked up.

Jared was stunned. He couldn’t move his lips to form a smile. His heart was being shredded. Their gazes locked as the words of the song continued to tumble from her mouth, words that sent a crack along the walls protecting his heart, blocking out the God he had loved and trusted.


Laura Senton has found peace and happiness, knowing she’s right where she belongs, running her own kitchen at A Piece of Heaven, a Christian coffee house in  Being partners with her dear friend, Trina, she has carved out a niche and counts her blessings daily for being able to do something she loves doing. When the sins of her past are brought to mind by the appearance of Sean Laylor, her teenage crush, Laura tries to hide from Sean, as well as her own feelings.

At first not recognizing Laura because she changed so much, Sean is at a loss as to why she tries to avoid him. He has no idea of what Laura went through years ago, or how she felt toward him, but he still feels a share of the guilt for her past once he learns  some of the choices she made.

Both covet the memories of their time together, but sins of the past can be a tough hurdle to get over.

Orders trickled to a stop over the next half hour.

Wow. So much for a quick and easy clean up. Laura wanted nothing more than to put her feet up on a chair and relax. She pulled her apron off, hung it onthe back of the door, and stepped out into the restaurant.

Trina wasn’t playing—must be on her last break.

Laura grabbed a mug and stepped over to the latte machine. She looked over the crowd.Lise was just clearing off a small table by the wall.

The seat was Laura’s favorite. Maybe because she Jared had proposed to Trina there. Or maybe because it had a good view of the stage but was out of the way.

"Excuse me. Could I get a cup of coffee? The other waitresses look pretty busy."

"Sure, I’ll..." She lifted her gaze past the broad chest and shoulders to a neatly trimmed beard andstartling blue eyes. Eyes she would know anywhere.

No, he wouldn’t know the blonde, curly hair, or the body that was half the size it used to be. She shook her head.

"Sorry, I thought you were someone else. I’ll get your waitress for you. What table are you—"

He touched her arm. "You look vaguely familiar. Are you sure we don’t know each other?"

Of course, he had no idea. But she knew him. Sean Laylor, high school quarterback, team captain senior year...why would he remember the fat girl with glasses and long, stringy hair who tutored him to get his English grade up so he could stay on the team and get into college?

She snapped back to the present. "Let me get your waitress for you." 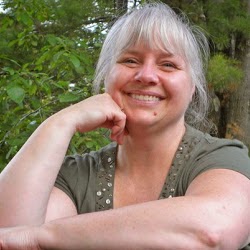 I was born and raised in and although I've seen much of the country, this is the area I will always call home. I love the change of seasons and the beauty each one brings. There is no place quite like it.

I've been married over 20 years and we have one teenage daughter who is currently attending college.

I am an active member in my church, a member of the worship band, and I write not just stories, but  music as well. Maybe one day you’ll hear some of them!
Posted by Donna B at 9:47 PM