By Appointment Only - Marianne Evans 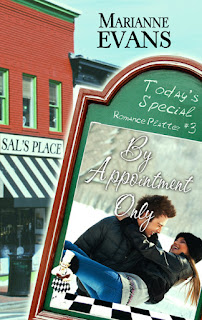 Woohoo! Welcome back, Marianne, and thanks for taking us back to Sal's Place. I'm so excited! Part 3 of the series...all I can say is "keep 'em coming!" This is definitely in my record book of favorite series!

BLURB
Political dynamo Matt Bellinger understands he has an unyielding responsibility to work hard for the betterment of his community and the world around him. Life, he believes, should be built strictly on effort and tangibles, not an elusive faith.
But that belief is challenged when a bill to spearhead volunteerism leads him to canvassing efforts at Detroit's legendary diner, Sal's Place, and a meeting with Heather Cavanaugh. His polar opposite, the street-smart beauty challenges his heart and perceptions. She's the head stylist at Optiva, a trendy, upscale hair salon in downtown Detroit, as well as a tireless volunteer giving back to the city she loves in honor of the God she serves.
Love blooms, gradually shifting Matt's perceptions. But when a life-threatening illness in his family challenges that fledgling faith, will he be able to hold fast to his newfound beliefs? Will he discover that faith makes all things possible and love makes all things beautiful?

EXCERPT
Matt made it to the hospital in plenty of time to give Mandy’s untethered arm a gentle squeeze and dot her forehead with a kiss. He loved the way her eyes lit up at the sight of his gift—a big, pink teddy bear with get-well-soon balloons tied to its paws. Once the pre-operative sedative kicked in, Mandy became sluggish, so Matt followed his family out of the room. Only Rick and Stephanie stayed behind.
In the waiting room, the O’Connors and a few couples from Rick and Stephanie’s church that Matt had never met before convened to wait for word from the OR. As a group, they joined hands and murmured a prayer. Matt watched, compelled by the scene, and he thought instantly of Heather, of how readily and easily she had prayed at dinner, just like these people prayed now. She was comfortable with her faith and her beliefs, as well as the pattern of her life.
Matt felt a stab of yearning that had nothing to do with the love he held for Heather. Rather, the ache that swelled through his chest as the prayer session ended stemmed from the fact that he could feel the peace that flowed. He saw it in their eyes and in the more relaxed way they moved.
But he couldn’t taste it for himself. He was an outsider, hungry yet rootless, staring through plate glass at a feast meant to fill and quench.
How, he wondered, could he ever break through?
“Hey there, handsome.”
From behind, that quiet, subdued summons reached his ears…then entered his heart.
Matt spun, face-to-face with Heather who stepped straight into his arms and held on tight. The love that washed through him was so powerful, words failed.

Wow! This is an absolutely WONDERFUL story! She had me from the first page. I really didn't want to put this one down even for an instant, but at the same time I didn't want to rush through it and have it end.

There is so much good I could say about this story that I don't even know where to start.
The love between Matt and Heather is so sweet! This is what romance is all about! The genuine heartfelt emotions as this relationship develops just wrap you right up in them!

And then, Matt's journey toward God is like another romance all in one.

This is definitely one of THE BEST stories I have read! 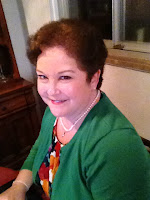 Marianne Evans is a multi-award-winning author of Christian romance and fiction. Her hope is to spread the faith-affirming message of God’s love through the stories He prompts her to create. Readers laud her work as: ‘Riveting.’ ‘Realistic and true to heart.’ ‘Compelling.’

A lifelong resident of Michigan, Evans is active in a number of a number of Romance Writers of America chapters, most notably the Greater Detroit Chapter where she served two terms as President. She’s also active in American Christian Fiction Writers and the Michigan Literary Network.