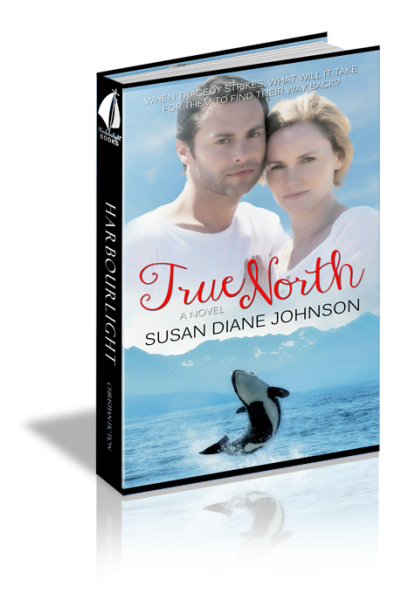 Welcome Susan! Thanks for joining me here! I loved your story and I know others will too so I wanted to share a little about it!

You certainly showed that you're not afraid to delve into tough subject matter! What drew you to write on two such sad topics?

Well, this book was inspired by my son and his desire to see the whales in their own habitat. I didn't intend to set out to write a book about a set of parents who'd lost their child. But as I fiddled around with different scenes, and created my characters, something just wasn't working. And then I did that thing "they" often challenge us writers with - asking this question: What is the worst thing that can happen to your characters?

Sadly, the worst thing I could do to these characters was a heartbreaking thing that had to come at the beginning.

And Lisa and Joe didn't work as a man and woman new to each other. They had to be connected. That connection was Cody, the little boy who loved whales. Lisa and Joe only worked for me as a couple trying to find their way back to each other.

And I'm so glad they did! That's why I love romance stories! There is an endless possibility of happy endings for those who are willing to try. And Christians should certainly be setting that example!

This story brings smiles as well as tears and will definitely inspire anyone who has drifted in their relationship and needs to find their way back!

Several months after a tragic accident that claimed their son, Lisa and Joe Kendall's marriage has fallen apart. Lisa prays every day for Joe to come back home so they can grieve their loss together. Feeling guilt over the death of their son, Joe has decided that the best thing for Lisa is for him to be out of her life. His marriage isn't the only thing suffering, and Joe is forced into taking time off so he can find "closure". Unsure where to spend two weeks, Joe decides to go on the Alaskan cruise they were supposed to take with their son. The last person he expects to see once the ship is well away from Seattle is Lisa, who hopes two weeks alone with Joe will help save their marriage. Little does she know that Joe has decided to file for divorce when they return home.

Lord, Joe’s missing so much. Help him, please. Help him slow down and enjoy his son before it’s too late. Cody will be grown and gone before he realizes it.

"I love you, too. See you tonight." Cody flipped the phone closed and handed it to Lisa, his eyes downcast. "Mr. Lee is making him work late. He won’t be at the game."

His effort to rein in his emotions was a valiant one,
and Lisa’s heart went out to him. Hot anger tore
through her. Her jaw tightened, and she fought to keep
from clenching her teeth. Lucky for Joe, Cody had
already hung up.

"Mom, please don’t be mad at Dad. He has to
work hard so he can pay for my birthday trip to Alaska
next year. So we can go see the whales, remember?"

Lisa nodded, still trying to control her anger at Joe.

"Please say you won’t be mad. Please? He’s the
best dad in the world."

How like Cody to forgive so easily. Why couldn’t
she do the same? Because it happened way too often,
and she didn’t like seeing her son repeatedly
disappointed.

"Hey, Mom, you’re not paying attention," Cody
complained a few minutes later as they headed down
the winding road that made up Whidbey Island’s
highway. "I thought you wanted to sing the ‘Cartoon
Song.’"

"I do, honey. I’m sorry. I’m just—" Lisa shook her
head. This situation was unfair to Cody. She shouldn’t
let her anger at Joe spoil his last baseball game. She
glanced briefly at her son then quickly back at the road.
He looked concerned, and she wanted to draw him
into a hug but reached over and ruffled the top of his
head instead.

"I’m just disappointed, honey. I wanted your dad
to be there for your last game."

Yeah, right. Mike Lee would keep Joe until way
after Cody’s bedtime if history was any indication. Joe
worked so hard for the man, not only had he missed all
of Cody’s games, family dinners, and picnics in the
park, he hadn’t even been to church in months. Her
anger sparked again, this time at Mike Lee.

But Cody shouldn’t feel the obligation to play
peacemaker between her, Joe, and Joe’s boss. Not
wanting to upset her son, she kept her opinion to
herself. Lisa hit the gas a little harder than she should
have as she pulled into the left-turn lane. Thankfully,
the green arrow lit up just then, and she didn’t need to
hit the brake.

As she rounded into her turn, two things
happened.
Cody burst into his mashed up version of the '
Cartoon Song.'
And Lisa realized with instant horror, the
oncoming car failed to stop at the intersection.

With a mother’s instinct, she threw her arm in
front of Cody only to have it thrown against the
dashboard when the other vehicle made impact with
hers a split second later. The pain meant nothing to
her, however, as she struggled against gravity to shield
her son. She had to protect him, had to keep him safe.

The tragedy of losing a child is heartbreaking enough, but having your marriage disintegrate because of that loss is enough to destroy anyone. Grief is different for each of us, but I think we all want to believe we can lean on those closest to us in our time of need.

Lisa struggles to stand on her own when Joe deserts her after they lose their son. She wants nothing more than to have Joe come back home so they can grieve together for their loss, support each other. But he won't even take her calls.

Joe can't forgive himself for his son's death, blames himself for not being there. He turns his back on God and is convinced that  divorcing Lisa would be the best thing for her.

This story is so very moving. It shows how weak we are when we try to stand on our own, but how much stronger we can be when we lean on God. Sometimes we just have to be willing to open our eyes to see His message to us in His creation around us.

This story will be a blessing for anyone who reads it!

I live on an island in Northwest Washington. During the day I work at my local hospital as a cancer registrar. During the evenings and on weekends, I write novels that I hope will bring joy and uplift the hearts of readers. You can find me on Inkwell Inspirations, a daily Christian Women's blog where I am a regular contributor. You can also find me on my personal blog, Suzie's Writing Place where I share my faith, my writing, and my love for books. I'm also onFacebook and Pinterest where I can explore my love of beautiful historical clothing, the South of France, beaches, and certain television shows.