Injustice for All - Robin Caroll 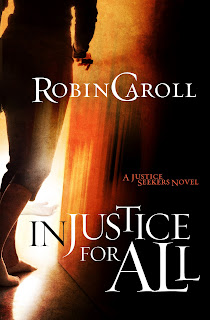 Welcome Robin! I just love romantic suspense, and this story is a great one! I realize this is the first book in your Justice Seekers series, and the second one will be out in September (can't wait to get my hands on it).

A federal judge lies bleeding on his office floor, betrayed by a most unlikely source—people who helped him bring criminals to justice. Now, why would someone working for the FBI need to disappear after witnessing this crime?

When Remington Wyatt sees her godfather’s murder, she recognizes the killers and knows it’s only a matter of time before they come to silence her. She must do the only thing possible to stay alive . . . run.

FBI agent Rafe Baxter is serious about his career, and solving a cold case involving a federal judge’s death puts him in line for the promotion he so desires. But the case leads him to the small town of Hopewell, Louisiana, where some secrets seem inextricably hidden deep within the bayou.

Injustice for All explores what happens when everything a person believes in is utterly destroyed. Who can you trust?


Every muscle in my body stiffened, and my mouth went spitless. Chambering a round was a distinct sound, unmistakable.

My hand gripped the railing as questions swarmed my mind. A gun? In Daniel’s house? He’d been opposed to firearms ever since my father was murdered.

I took a step off the second-story landing. My palm itched to grip my own handgun at the moment, but knowing how Daniel felt, I’d never bring it over. Even when I spent the night.

“Put that gun away.” My godfather’s voice held a tremble as it drifted up to me. Never, ever, had I heard Daniel’s voice be anything but commanding.

My heart pounded harder than before—my ribs felt the punishment. My knees weakened.

“Not hardly. You just couldn’t leave well enough alone, could you, Daniel?”

I broke out into a cold sweat, recognizing that voice. And the angry tone. I should have—sure had heard it enough times. Was this real? Not him. I had to be mistaken. Because if he’s the one with the gun…

I descended, my feet making no sound on the plush stair runner. Reaching the first floor, I glanced at the alarm system control panel by the front door. No indicator lights ablaze. My throat and gut flipped places. Why have the security feature if Daniel wouldn’t use it? I padded across the cold marble floor of the darkened foyer and activated the silent alarm.
The gated community security would arrive.

Would it be soon enough?

“When government witnesses come to me after a trial and confess your team pressured and bullied them to fabricate their testimony, what am I supposed to do? Look the other way?” Indignation rose above the wobbling of Daniel’s voice. “That’s not who I am.”

A boulder slammed sideways in my throat. I froze. This couldn’t be happening.

A lone siren howled in the night. Shivers took over my self-control. I peeked down the hall. Light spilled from Daniel’s office.

I quickened my pace down the hallway, careful not to bump into the entry table with the lamp that had crystals hanging from it.

“Too bad. It could have saved your life.”

“Get out of my house or I’ll call the authorities.” Daniel’s voice, once again strong…authoritative.

“As if that would do any good? We’re acting on orders here. Orders from higher than our pay grade. We’ve always been acting on orders. You’re the one who is dispensable, Daniel.”

Daniel’s gasp was barely audible. Unlike my pulse pounding in my head.

No mistaking that sound either—shots fired with a silencer.

Oh my goodness, this story just grabs you from the first page and has you on the run with Remington until the end. The prologue alone is enough to pull you in, to draw you to Remington's side, to want to see justice done!

And Rafe - so torn between emotion and ambition, what he has to do vs. what he really wants. What great characters! Ms. Carroll gets you right under their skin.

This is one heart pounding thriller that keeps you on the edge of your seat with a steel thread of faith running through it to hold on to. The plot is intricately woven and the author layers danger and secrets, love and fear, faith and forgiveness with such a light hand that you don't even realize how deep you've gotten until there's nowhere to look but up.

Inspirational romantic suspense doesn't even come close to telling you all that this book is. It's a gut wrenching thriller that will hold you captive until you reach "The End" - and then you just want more.

I can't wait for the next one!


Robin Caroll has authored eleven previous books including the critically acclaimed Deliver Us From Evil. She gives back to the writing community by serving as conference director for American Christian Fiction Writers.

A proud southerner, Robin lives with her husband, three daughters, and one precious grandson in Arkansas.

For more about the author you can find her at: www.robincaroll.com
Posted by Donna B at 10:30 PM