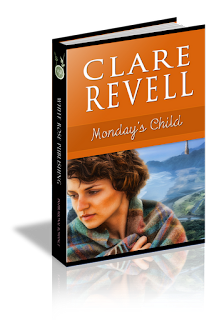 Welcome Clare! I've been anxiously waiting for the start of this series! You have such a great touch with suspense I just couldn't wait to read it! I love the rhyme that tells about the stories to come in the series!

Monday’s Child must hide for protection,
Tuesday’s Child tenders direction
Wednesday’s Child grieves for his soul
Thursday’s Child chases the whole
Fridays Child is a man obsessed
Saturday’s Child might be possessed
And Sunday’s Child on life’s seas is tossed
Awaiting the Lifeboat that rescues the lost.

So here's a bit about the first:

Monday’s Child must Hide for Protection...

This was not the assignment Luke Nemec expected when he came to the UK—babysitting a beautiful widow. It wouldn’t be so bad if Sara wasn’t such a hostile witness. Despite her complaints and continued jibes, Luke finds himself falling for her.

When, Sara Barnes is thrown into the witness protection programme, she becomes the “wife” of Lt. Luke Nemec, an American cop on temporary assignment with the British police. Despite Luke’s American bravado, she finds he’s kind and considerate in ways her late husband never was.

But things aren’t always what they seem, and Luke soon realizes he’s fighting a battle of two fronts to keep Sara safe. Loyalties are called into question, and he’s no longer certain who he can trust. Luke is way out of his depth. As the threats against Sara escalate, it’s a race against time to find her husband’s killer before Sara is silenced forever.

Just a perfect June day...Sara leaned into Jamie as they walked the damp, dark streets toward the car. The movie had been great, her new husband’s company magical, but the thought of the rest of the evening made her heart sing. Not even the drizzling rain could quench her joy. God had been gracious to her, by placing a wonderful man like Jamie Barnes in her life, at a time when she thought she was destined to be alone.

Jamie was a charmer, with dark curly hair and movie star looks to match. She wasn’t sure what she’d done to deserve his attention, never mind his sudden proposal, but she wasn’t complaining. He loved her, so she could overlook his foibles and long days he spent travelling for work.

A jarring thud jolted her as the bag twisted violently off her shoulder. “Hey...” She gripped at it to find herself flying through the air, her head hitting the ground hard.

Jamie set off after the thief, as Sara struggled to her feet, seeing stars. Her head spun, and she felt sick. So much for the perfect day. She turned to see Jamie and the thief struggling under the streetlamp. A flash of metal, a swift upward movement of an arm and Jamie hung writhing, looking down at his chest. She screamed his name, her heart pounding as a stab of fear and shock hit her hard. “Ja-a-a-a-m-m-m-m-i-i-i-e-e-e…”

The tall thin man turned to face her, the knife in his hand. He released Jamie, letting him slump to the ground. The man’s piercing gaze, the hatred in his eyes, and the cruel thin hardness of his lips burned into her memory as Sara ran towards her husband’s motionless body. Long greasy locks and fine rain outlined against stark white streetlight framed the assailant’s face like a halo, reminding her of the angel of death.

The terrifying sound of a gunshot tore through the misty night air. The sound ricocheted off the alley walls, blue smoke expanding outwards little by little. Pain exploded though her as a bullet ripped into her body. Sara screamed as the blast knocked her to the wet ground. She landed hard, next to where Jamie lay in an ever increasing pool of blood, her breath coming in short gasps.

She grabbed her leg in pain as slow, deliberate footsteps squelched towards her. Black lace-up combat boots stopped in front of her face. There was a loud click as the hammer on the gun rose, but she wasn’t as scared as she thought she might be. Lord, if I am to die now let it be swift.

Footsteps ran down the street towards them, shouts echoing. A closer voice called. “We have to go. Someone’s coming.”

The man gave her a cold stare. “You’ll keep, doll. I’ll be back for you. That’s a promise.” The threat in his voice echoed in the empty recesses of his eyes. Sliding the gun under his jacket, he vanished into the night, taking her bag with him.

Wow, with an opening scene like that how can you not just jump right in? I know I had to! What a great story! Ms. Revell keeps the twists and turns coming. And you've been warned - things are not always as they seem!

If you love a good romantic suspense then grab this one quick! You won't be disappointed!