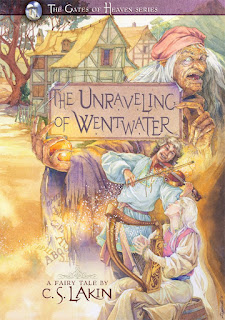 Once again I've been lead into the world of inspirational fantasy. Take a peek at  The Unraveling of Wentwater and learn some of the great truths that sneak into this wonderful story.

This story explores love, jealousy, mercy, and judgment. It spins a tale about the power and magic of words, and as the marsh witch, who keeps words in a jar, warns, “Be careful with your words, they have consequences!” Secrets and superstitions abound in the kingdom, but only a water creature who lives at the bottom of the lake and guards the sacred site knows the truth and can help Teralyn restore all.

In this fourth installment of The Gates of Heaven fantasy series, readers will learn of the fourth of seven sacred sites heaven set up on earth to prevent evil from gaining a stronghold over the hearts of men. Inspired by the traditional fairy tale Sleeping Beauty, readers will be taken on a journey that will leave them, in a word...speechless.

When the simple, backward village of Wentwater begins disappearing one word at a time, no one can figure out how to stop it. Not the learned men living up in the Heights nor the superstitious leaders of the village. But those who had attended the baby naming ceremony seventeen years earlier remember the words of the marsh witch, and her pronouncement that the babe would one day cause the unraveling of Wentwater. In their fear, the villagers banish the parents and set their cottage on fire, and the babe was thought to have perished in the flames. But . . . did she?

Teralyn lives in the Heights and wants nothing more than to create beautiful music on her lap harp. When she comes down to the village for a festival, she falls in love with a villager named Fromer, much to the fury of Fromer’s brother, Justyn. Justyn’s jealousy moves him to make a deal with the witch, and when Wentwater vanishes due to a backfiring spell, it leaves Teralyn, the only person left in the kingdom, with a terrible choice. She must leave her life and forget Wentwater, or she can spend seven long years restoring everything back to the way it was, by spinning nettle into thread and stitching the world back . . . one word at a time.

“This child will be the undoing of Wentwater. Before she turns eighteen, the village will unravel and all will be lost.” She searched the room, peering over heads, until her eyes lit upon a spinning wheel in the corner. “I see the thread of life tangling, her fingers spinning the spindle, stitching with thread, thumbs bleeding as she sits at the wheel, undoing, undoing . . .”

She cast a sideways glance at Arlynna, whose voice had fled the room. “You must send the
mother away. And the babe . . .”

Ursell reached down and, with something akin to tenderness, stroked the child’s forehead. Iris
grabbed the doorjamb to keep from fainting. She strained to hear the witch’s words, which came out
barely above a whisper. “. . . must be put to death. Before Wentwater comes to naught.”

Ursell’s words dropped like stones into a deep waterless well, rebounding off the walls of the
room and draining hope from the hearts of all in attendance. As the witch pushed through the mob of
women and disappeared from Iris’s view, chaos erupted. Voices unleashed gave vent to fear and
hysteria. Arlynna stepped over the voices around her and summoned attention.

“There is little time. We must act quickly!” With her eyes, she signaled to the two older women who had blessed the babe. They grasped Dineen’s arms, one on each side, as she protested and
wriggled to get away. Cries rose up in a chant to Iris’s ears, although her own voice still wandered lost in the stifling room. A whirlwind of irrepressible fury howled through the hallway.

Iris watched as more women latched on to Dineen, as another scooped up the babe from the
cradle, as Dineen flailed for her child, her agonizing screams melting Iris’s heart. But Iris knew there
was nothing to be done, no way to stem this tide that must rush in and sweep away such a curse. If the
babe was indeed destined to bring destruction to Wentwater, who were they to ignore such warning?
Iris didn’t allow herself to think of the pain and terror the new mother must be feeling. Never in her
own life had she witnessed such portentous omens. Had Ursell seen the future in her glass eye—or was it her malevolence and bitterness at her own banishment that had drawn her from her marsh and set her feet toward the village? Iris would never know. And she gave herself no time to ponder such
inscrutable thoughts.

A voice yelled. “Burn that spinning wheel!” Another cried, “Burn down the cottage, burn
everything!”

Like fairy tales of old, this is a wonderful story full of the great truths of the ages. If you enjoy fantasy, you will love falling into this tale.

For a chance to win a copy, go to:
http://www.goodreads.com/book/show/13632520?utm_medium=api&utm_source=giveaway_widget

For more info. about C.S. Lakin and her other stories go to:
www.cslakin.com
Posted by Donna B at 10:51 PM