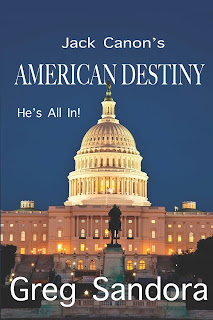 I'd like to welcome Jack Canon, a new author to me, but when I saw this story, I just couldn't resist sharing it.

The truly scary part is that this is frighteningly possible in this crazy world.

BLURB:
It’s the steamy summer of 2016 in Washington, D.C. just days before the Democratic National Convention. A long and painful recession has left ordinary Americans suffering, spawning the hottest Presidential Contest in history. Jack Canon, a man born into privilege, a witness to great social injustice is going to be President of the United States–no matter what! Desperate and corrupt, the leader of the free world orders a hit to slow him down. The plan backfires–the wrong people are dead–a manhunt points to the unthinkable–The President of the United States.

Rewind one year, Jack’s focus on redistribution of wealth and energy has made him powerful enemies. Once his friends, Rogue Billionaires, Oil Sheiks, the Mob, all want him gone. The current President wants him alive–thinking he can win against an unabridged liberal. A Universal Raw Nerve of wealth vs. poverty is exposed becoming a thrill ride as deep machinations of espionage, geo-politics and deception, even murder play out. Kind and charismatic, Jack’s just naughty enough to have you falling for him like one of his loving circle of loyal friends. Of course he’s flawed, a dedicated family man, faithful to one woman, but in love with two. Is it his fault his best friend is impossibly jaw dropping beautiful? Think the crime and passion of the Godfather meets the romance and innocence of Camelot. A story that could spark a movement, a book that can seed a revolution. A heart thumping climax so shocking you’ll pull the covers and draw the shades! One things for sure, through all the drama and suspense, you’ll be pulling for Jack!

Originally from the Portland, Maine area, Jack lived and worked there for years before moving to Southwest Florida. He's currently working on the sequel to Jack Canon's American Destiny - which will be titled Camelot  A Tender Romantic Thriller. The sequel will be available in about three months. Currently he is a professional manager, living in Florida with his beautiful wife and children, and following his passion.

Some other projects include a children's book called Sammy the Sea Turtle - about an infant sea turtle taken from his nest the night he was to find his way to the sea. Sammy lives with the family until their son - the boy who took him, graduates from high school. On that day Sammy, backpack in tow - begins the long journey home.

A second project in the works involves angels - a man during a visit to Bar Harbor Maine encounters an angel; quite accidentally, he is told - she was not supposed to make him aware of her existence. Only three others have ever seen the real thing. Naturally he falls hopelessly in love with the beautiful creature.
Posted by Donna B at 9:00 AM