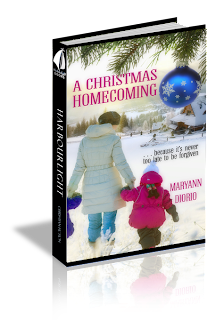 Here's a Christmas story from last year's releases that I missed, by an author I've never had the pleasure of reading before. So welcome MaryAnn, and thank you for stopping by today!

Seven Christmases have passed since Sonia Pettit last heard from her daughter Jody. Since Jody’s departure, Sonia’s world has been turned upside down. Her husband has died of a broken heart, and her son, bitter over his sister’s destructive actions, has become rebellious.

Her greatest desire is to have her family together at Christmas, but after what Jody has put them all through, can Sonia truly forgive her daughter?

Jody Pettit O’Dair ran away to experience a life of adventure and excitement, but since her departure, her world has been turned upside down. She’s been abandoned by the man she met and married, lost her job, and is unable to care for her two children. With nowhere else to turn, this prodigal daughter begins the long journey home and prays she will be welcomed after walking away so long ago.

Will Jody find forgiveness in the arms of her family as easily as she received it from God?

Sonia Pettit pressed her hand against her chest in a vain attempt to ease the gnawing, endless ache in her heart. In a few short days, she’d mark the seventh Christmas since her daughter’s frightful disappearance. A sudden, unannounced, and, worst of all, voluntary disappearance with no explanation, no sense, and no forwarding address. A disappearance that had incinerated Sonia’s soul and left it a cold heap of ashes.

Outside the living room window, autumn had long since passed, leaving behind bare branches, scrawny bushes, and gray-white skies. A soft snow fell, dusting the yellowed lawn of the 1920s Victorian home she and Rick had purchased as newlyweds twenty-nine years earlier. The home in which they’d raised their children.

But those early happy times had turned into a nightmare.

She leaned her forehead against the windowpane, her eyes searching far into the distance. More times than she could count, she’d riveted her gaze on the sidewalk leading up to the house, hoping against hope her daughter would suddenly appear. But each time, Jody’s imaginary figure would evaporate into nothingness.

Sonia blinked back the stinging tears. Truth be told, some days worry clawed at her, tearing her heart to shreds. But there were other days, just as wrenching, when rage gripped her to the point she never wanted to see her daughter again. Like a scorching iron, raw pain seared the edges of her memory, leaving only blame to vent the hurt.

After all she’d done for her child. To have Jody leave without warning, without saying good-bye, without so much as an “I’ll be in touch, Mom.” Nothing. Just cold, heartless rejection fueled by arrogance and ingratitude that bordered on the cruel. A vicious slap in the face to a mother who’d given her life for her children.

Sonia turned at the hissing sound coming from the kitchen. She rushed to the stove where her soup had boiled over. She reached the pot just in time to remove a rattling lid from its precarious perch. A small puddle of homemade chicken soup covered the gas burner. She turned off the gas and moved the bubbling mixture to a back burner. Then she took the dishcloth hanging on the faucet and carefully wiped up the mess just as Ben walked into the kitchen.

“Morning, Mom.” Ben scratched his disheveled head in a valiant attempt to jerk himself to wakefulness. “Got any coffee?”

Sonia pushed down her anger and forced a smile at her lanky twenty-two-year-old son. The second-born of her womb. The son with the tender heart gone awry. “Just made a fresh pot. I’ll pour you some.”

“Thanks.” He yawned. “I’m not awake enough to pour it myself.”

She took a large blue mug from the cupboard and held it in her left hand while she poured coffee into it with her right. She handed the mug of steaming brew to Ben. In a few months, he’d be graduating from college and moving right into a job with a local accounting firm.

His father would have been proud of at least one of their two children.

She squelched the painful memories. Christmas was coming, and she needed to put on a smile for Ben, if not for herself.

So much heartache in such a short story! As a mother I can only imagine the pain of having a child move away leaving no contact information. Much like the prodigal son, though, this a story of love.

What a heartwarming story of forgiveness - and a wonderful reminder of the real reason for Christmas! He came to seek and save the lost, and to forgive and make a way home. I think Ms. Diorio gave us a wonderful gift in this story!