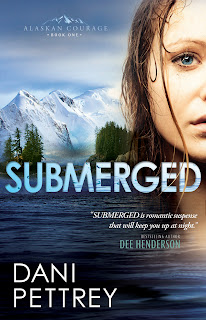 Getting tired of all my favorite authors who keep cranking out good stories? Well, here's a new one for you! Dani Pettrey. I stumbled across her story and loved what I read (well okay, the cover caught my eye first - nice job!) but then the back cover hooked me. And since Dee Henderson recommended it, I had to check it out!

So tell me Dani, are you a diver? or have you dived in any way before?

I took scuba diving lessons, but found I didn't enjoy the sensation of breathing through a mask so I much prefer snorkeling :)

I often wonder if I would feel the same way. Although I didn't like snorkeling because I was afraid I would suck up water! So many people I know who love swimming have not liked scuba. Perhaps you're a little claustrophobic?

I'm not sure if it has something to do with feeling claustrophobic with me. I think it's more you can't come straight up when you want to with scuba diving, but you can snorkeling :)) I like to know I can reach the top at any time I want to.

Well, no matter, you've done a marvellous job taking us down there with you. It certainly felt like you went plenty deep!

Bailey Craig vowed never to set foot in Yancey, Alaska, again. She has a past, and a reputation--and Yancey's a town that doesn't forget. She's returned only to bury a loved one killed in the plane crash, but then dark evidence emerges and Bailey's own expertise becomes invaluable for the case.

Cole McKenna can face dangerous rescue dives. He can face the fear a murderer may be threatening his town. But facing the reality of Bailey's reappearance is a tougher challenge. She broke his heart... but doesn't seem to be the same girl who left Yancey ten years ago. And he's not the same guy she left behind.

Racing against the clock and a rising body count, Bailey and Cole must move beyond the hurts of their pasts to work together until the truth of what is hidden in the depths finally surfaces.

WOW! Certainly makes me want to find out more! Come on, dive in!

Never wager unless you control the stakes.

And she’d thought she held such a strong hand.

Agnes Grey forced her head against the rattling seat back, clenched the armrests with such force her nails broke. Perspiration soaked her brow, seeping into her eyes, but she refused to cry. She was too old to cry.

The plane was going down into the water within sight of her home. Home—warm, safe, dry. She’d never see it again.

Her friend Henry Reid strained to look back, his white knuckles bulging on the wheel as he fought to regain control of the spiraling Cessna, but the fiery plane seemed bent on destruction. Panic flashed through his eyes. “Tighten your belts. Put your head between your knees.”

His concern was sweet, but it wouldn’t change the outcome. Their fate was set.

They were going down—hard and fast. The other passengers’ terrified expressions said they knew it too. Innocents, every one, Agnes thought, fury on their behalf trumping her own fear. She was the only one on board who knew this catastrophe was no mechanical failure. It was him. She knew it as surely as she knew she’d seen her last sunset.

A bitter cry tore from her cracked lips. Any semblance of control on her part had been an illusion.

She’d played her hand, and he’d just called her on it.

If she hadn’t been so stinking stubborn, if she’d kept her mouth shut and given him what he wanted . . But Momma hadn’t raised her like that. She’d done the right thing. She only wished she hadn’t brought the others down with her.

Managing to crane her neck left, she took in the sight of the loving couple’s hands clasped tight, crying as they whispered frantic words to each other.

Agnes’s stomach lurched. She’d brought them on this journey, doomed them to a watery tomb.

Acid burned up her throat.

Wow! Have you ever started a story, intending just to read a couple pages...then you can't put it down. You take it with you everywhere you go and read at every chance you get, even if it's a page or two. Well, that's what you can expect from this one. Submerged grabs hold of you from page one. Be ready to dive in, just don't forget to come up for air! Enjoy!

Dani Pettrey is a wife, homeschooling mom, and author. She feels blessed to write inspirational romantic suspense because it incorporates so many things she loves--the thrill of adventure, nailbiting suspense, the deepening of her characters' faith, and plenty of romance. She and her husband reside in Maryland with their two teenage daughters. Visit her website at www.danipettrey.com.
Posted by Donna B at 9:36 PM