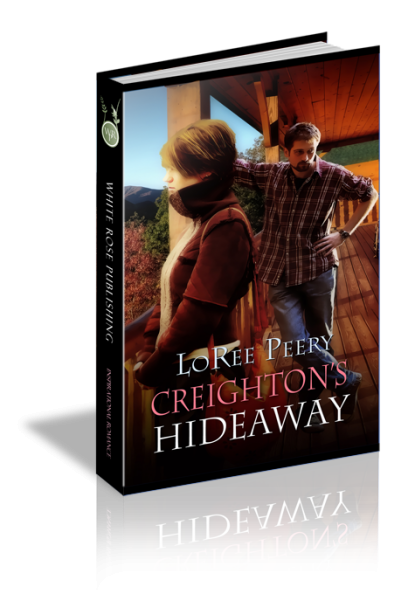 Welcome back, LoRee! I'm so glad to see

Needing to finish her thesis in order to keep her job working with youth in a residential treatment center, Shana Arnold sequesters herself on Creighton Rice’s Nebraska ranch. She expects the secluded hideaway to provide a peaceful environment. What she doesn't expect is to become the victim of identity theft and a crazed home invader.

Creighton Rice has been content to live alone with his God—until he meets Shana. He's drawn to her, but must fight the attraction. Getting close makes him face a lifetime's accumulation of scars. Plus, Shana doesn’t share his faith. But when Shana's life is threatened, Creighton must protect her—even if it means letting her in.

Will Shana discover that even when a woman loses everything, she can regain courage and strength through faith in God, and can Creighton allow God to heal scars and open the door to a lifetime with Shana?

Creighton found it hard to pull his gaze from Shana, trying to remember everything Rita had mentioned about her. The freckles were a surprise. Her large, blue-green eyes were stunning.

“Creigh,” his sister’s voice drew his attention as he headed her way. “I said, Shana will need a day or two to acclimate. She’s a terrific program manager, usually so in charge of what’s going on that nothing shakes her. But this ultimatum to get her degree came like a jolt out of the blue.”

“I thought she’d been working on her degree since she started as the director.”

Rita cradled the small roundness of her abdomen. “True. But she had planned on another semester to pull it all together. Upper management decided it was a good chance for her to use some vacation time and get that paper finished now to secure her job before it goes to someone hungrier.”

Creighton pulled Rita close and enveloped her in a hug.

Rita mouthed against his chest, “I think peace and quiet will do her a world of good.”

“If you say so, little sister.” Creighton pulled the end of Rita’s long braid in a gesture that went back to their childhood. “The timing is perfect since most of the cabins are empty. End of summer, before hunting season.”

He slanted a look across the hood of the SUV.

Shana’s thoughts must be far away. Was she as lost as she appeared to be? She looked small, but he sensed her strength was cloaked in vulnerability.

“You’ve been away too long, kid,” Creighton said to Rita. “Next time I see you, I won’t be able to get my arms around you!”

Rita punched his upper arm as they stepped apart. “Then I’ll expect you to hug the baby, Bro.”

He gave her focused attention. “You’re doing OK? You and the baby and Ray?”

“Couldn’t be better. The Lord blesses us every day. How about you?”

“Have to agree and say He blesses me beyond words. Don’t know where I’d be if He hadn’t brought me back to the ranch.”

“I thought of you when Shana said she was pressured by our boss, and we were so close following our sessions at Hope Circle, we just had to come see you.” Rita glanced at Shana and lowered her voice. “Can you check on her for me? When she starts working on a project, she often forgets to eat.”

Shana shot them a wistful smile and spoke to her feet, “You’ve done enough talking about me. I’m right here.”

“Right as usual, boss,” Rita quipped. “Guess it’s time to get back on the road. Ray’s probably had enough of his mom, so I’d better head down to Norfolk.”

Shana left her side of the vehicle to face them, leaning against the fender.

“Wish you could stay, Sis. Will you spend the night there, or go back to Lincoln?” Creighton reached in and grabbed all of Shana’s bags.

“This round belly needs its own bed, so we’ll eat a bite and head on south. I promise, after the baby comes, we won’t be such strangers to this wonderful ranch.”

When the women shared a warm embrace, he surmised that feminine tears threatened to surface. That’s all I need around here, a bawling woman. He watched them draw apart, avoiding eye contact.

“I suppose the next time I see you, you’ll be waddling like a duck,” Shana’s obvious attempt to lighten the moment came out rather flat.

“In two weeks? Dream on. You do your writing but don’t get so carried away you neglect taking in the ambiance of this land. That tiny cabin will drive you nuts in a couple of days! There’s not enough inside to sort and rearrange. So go out and enjoy nature. That’s an order.” Rita laughed.

“Tease all you want. I have plenty of interviews to tie together. In all seriousness, Rita, thank you for everything. Going to O’Neill with me, and bringing me here.” Shana waved an arm in front of her, indicating the expanse.

He could get used to the soft cadence of her voice. Keeping his eyes on Shana, Creighton longed to discover if those short dark curls were as soft to the touch as they looked. He guessed they were natural and he suspected she was a shampoo-and-go kind of gal, not one to fuss over her appearance.

And she didn’t have to. He found her stunning.

“Nonsense,” Rita sputtered, and turned from another quick hug. “I profited as well as you, sitting in on those group counseling sessions. For now, you’ll love it up here and it’ll do Creighton good to have you around. I’ve wanted you two to meet for a long time.”

“Well, little sis, your wish has been granted.” Creighton tugged Rita’s braid again while holding the door open. His expression went serious when he swung it shut. “Drive safe, you’re carrying my nephew, you know.”

“Or niece.” Rita waggled her fingers and put her vehicle in gear. “Bye, you two.”

Shana shoved her hands deep into her pockets. It seemed to Creighton that she shrank into herself. He studied her as much as the SUV turning onto the blacktop.

What had he gotten himself into this time? Big brother always there to help his little sister. He took one last look towards the road and caught a flash of sunlight as it glinted off Rita’s windshield.

http://pelicanbookgroup.com/ec/index.php?main_page=product_info&cPath=37_46&products_id=591
Posted by Donna B at 9:49 PM