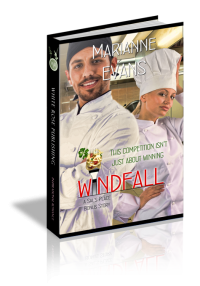 It's another story from Sal's Place, folks! And another winner from Marianne Evans, I'm sure. I love this series!

If the ratings are correct, we've all gotten a bit hooked on reality TV- and the cooking shows rank right up there. Well, Ms. Evans has tied right into that craze and brought us a great story. Come take a peek...

The Motown Master Chef Competition is firing up at Sal's Place! This year's battle features two combatants who dish up compelling stories as well as fabulous food.

Scott Allen was once the embodiment of cocky, self-assured arrogance. Family tragedy shattered that pattern of life and turned him straight to the salvation of a God he now serves in every way possible. Formally trained, he's head chef at Bella Toscana Bistro in downtown Detroit.

Sarah Rutherford runs the kitchen at Premiere, a steakhouse in the suburbs. Skilled through hands-on training alone, Sarah comes from humble beginnings, and worked her way up the culinary ranks via moxie and innate skill alone.

Scott and Sarah share a history as colleagues and friends, and both have dreams of winning, but only one will emerge victorious. Step up to the counter and cast your vote! But remember, this competition isn't just about winning.

“For the fifteenth year running, Motown Master Chef asks the culinary question: Can high-end chefs bring their own unique spark to short-order cooking and satisfy the everyday palate?”

The emcee of the TV special, Jake Pullman, launched into further introductions; Scott battled a quivering stomach and zips of electricity that sizzled against his nerve endings. Never had he been so nervous. He waited in the restaurant kitchen, behind a set of metal swinging doors, awaiting his entry cue from Jake. Through a small oval window, Scott continued to watch the proceedings.

Scott expelled a stream of air in an attempt to remain steady. He looked down, at a clean, though somewhat worn, tile floor. With a quick glance to the left, he took in his combatant for today’s taste-off. Sarah Rutherford. She adjusted her apron and seemed to gather herself as well while she shifted from foot to foot. Long brunette hair was slicked back into a smooth, shiny ponytail. She was tall and slim—with the face of a super model—or so Scott had always felt. What a stunner…

“Sarah Rutherford is the head chef at Premiere, a European-style eatery in Troy known for its inventive entrées. Sarah is participating today to both honor and support her sister, Lucia, who is a recent survivor of breast cancer. She’s definitely in this game for all the right reasons, so Sarah, come on out!”

Scott jerked to attention when Sarah fixed in place a dazzling smile and pushed through the kitchen divider. She never wavered as she strode to the front counter of the restaurant. Scott caught his breath, captured by the double-whammy of Sarah’s smile and what he knew was coming next—hisintroduction.

“Now, let’s meet Scott Allen. Scott runs the kitchen at Bella Toscana Café in downtown Detroit. He may have graduated from the renowned Poscelli Culinary School in Florence Italy, but downhome roots and affection for Detroit bring him to Sal’s Place and earn him the chance to win a ten-thousand dollar paycheck that would help fulfill his dream. And what’s that you may ask? Nothing less than establishing a restaurant of his very own.”

I refuse to publish any spoilers, but I loved this story! Two master chefs, one competition, and so much more at stake than the prize. Reality TV with heart!

What a neat perspective to this story! I guarantee you'll fall in love with these characters. Scott has a heart of gold, and is a very different man from the one Sarah used to know. And Sarah is after only one thing, winning the prize to help her sister pay her medical costs as she recovers from cancer. The end is a nail biter as you want both to win, but watch one nearly crash and burn. You gotta read it to see how it turns out.