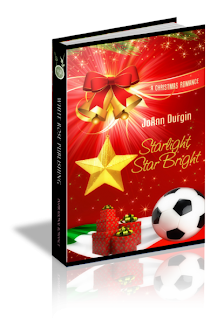 Starlight, Star Bright first star I see tonight...and this one's definitely a star! Oh my goodness, after reading this excerpt I couldn't wait to jump in and read this one!!!

Dante Moretti, Texas-born goalie of an Italian World Cup champion team, expects Starlight, Iowa will be only a blip on the radar of his life. Grabbing a quick meal at Barney’s Diner during the holidays, Dante meets two women who capture his heart in very different ways. Then his rental car won’t start and leaves him stranded. Does the Lord have a plan for bringing him—and keeping him—in Starlight?

Amanda Marston is excited to be home for her brother’s wedding. When she drops in for a cup of coffee at Barney’s, she’s charmed by the mysterious, Italian-spouting cowboy. Before she can blink, the handsome stranger is helping with projects all over town and working his way into her heart. Does God have a plan for Dante in her beloved little Starlight or will he take her heart with him when he returns to Italy?

A gust of cold December air blasted him as the front door flew open, the bell jingling away. Dressed in a light blue knit hat, jeans, a white parka, and snow boots, a young woman stepped over the threshold of the diner. With effort, she leaned against the door while the wind howled outside.


Dante jumped from his seat, moved around her, and gave the door a firm push.
She graced him with a bright smile. “Thanks.” Eyes the color of dark chocolate—with a hint of warm, melting caramel—met his. With her cheeks flushed pink and snowflakes dancing on dark lashes, she was lovely.

They both turned as Caroline rushed forward, moving faster than he’d have thought possible as she enfolded Amanda in a warm embrace. “Oh, honey, what a wonderful surprise. I knew you were coming for Jake and Julia’s wedding, of course, but I didn’t expect you so soon. Sure is great to see you. We’ve all missed you around here.”

When Amanda pulled off her hat, a mass of loose, honey-blonde curls tumbled past her shoulders. “Molto bella,” Dante said under his breath. The last rays of sunshine shone through the picture window behind her, forming a sort of golden halo around her glowing face. Wow. Christmas season or not, all the driving must be getting to him. Next he’d be seeing Santa, flying reindeer, and elves.

“I decided to combine vacation time with the Christmas break and come home early. If Julia needs any help with last-minute details, I wanted to be here. Besides,” Amanda said with a grin, “palm trees and flip flops at Christmas somehow seem…wrong. You can’t beat Starlight during the holidays.”

“You got that right,” Caroline said. “Sit yourself down and I’ll get you a cup of coffee.”

“Actually, I called ahead, and Martha’s holding a box of frosted sugar cookies for Jake. I parked out front, and when I saw you through the window, I couldn’t resist stopping in to say hi. I’m going to run over to the bakery before Martha closes for the night, and then I’ll be back.”

Amanda slanted a curious gaze to where he stood beside her as if rooted to the floor like a teenager with a silly crush. She tugged off one glove and held out her hand. “Hi. I’m Amanda Marston. Thanks again for your help.”

“Buona sera, signorina.” Slipping into Italian came naturally but he hoped this gorgeous woman wouldn’t misconstrue his words and think he was some kind of Romeo trying to impress her. Based on her expression, she’d formed no early judgments. He reached for her hand, pale in contrast to his own, which was bronzed from the unrelenting Italian sun. The fact she wore no engagement ring or wedding band filled him with an unexpected sense of satisfaction. “I’m Dante. Very nice to meet you.”

“You, too.” Amanda tilted her head.

Her movement drew his attention to her hair. Those blonde curls fascinated him. “Italian or American?”

He released her hand, ignoring Caroline’s smug grin. “Both. It’s sort of a long story.”

“Aren’t they all?” Her lips creased into an inviting smile. “I’d like to hear it sometime.” This woman was no shy wallflower, but her comment came across as simple curiosity rather than overt flirtation. Although he liked assertive women, he’d encountered far too many fawning, aggressive fans in the past few years. But Amanda seemed genuine, unassuming, and friendly.

Caroline elbowed him as she rounded the counter. “I would have introduced you, Amanda, but I hadn’t been able to get a name out of him. Until you came along, I’d decided to call him Italian Cowboy. After all, how many Italian-spouting cowboys do we get traveling through Starlight on the second Tuesday in December?”

Amanda laughed. “Not many, I’m sure. I’m going to run over to Martha’s, and I’ll be back in a few minutes for that promised cup of coffee.” With a quick wave, she tugged on her hat and opened the door, setting that bell to its infernal jingling.

“Was she a figment of my overactive imagination?” The question slipped out as Dante sank back onto his seat. He hadn’t intended to say it out loud, and he needed to leave before Amanda returned. His brain told him one thing, but why did everything else in him urge him to stay? Something about Amanda was different. Very special different. Need-her-in-your-life different.


Starlight, Star Bright...what a wonderful title for a story that shines so bright. I didn’t want to put this one down and I bet you won't either.

Just from the way he talks, I want to bask in the aura that Dante creates. I can hear the Italian words roll off his tongue, and I can totally understand Amanda trying to hold on to her heart and feeling it slip a little more every time they’re together. Amanda is sweetness and kindness personified. And Dante is equally sweet just trying to find his way back to God.

What a wonderful story! If I could, I would give it more than just 5 stars!

And if you like this one, be sure to check out the prequel Meet Me Under the Mistletoe! (Both stand alone.)

Jacob Marston, Starlight, Iowa's hometown hero made a long-ago promise to the Lord: he won't kiss a woman until he knows she's "the one." Now at age twenty-eight, the rugged firefighter questions if it'll ever happen. Then, he meets his best friend's sister, and Jake believes he's found the woman of his dreams. But what will she think when she discovers his vow?

When Julia makes an unexpected confession on Christmas Day, Jake shares his secret with her, and it looks as though happily-ever-after will make a holiday appearance.

But somehow, everyone in the tiny town of Starlight learns Jake’s secret, and he's instantly transformed from town hero to laughingstock. Did Julia reveal his secret? Can Jake forget the humiliation and find his way under the mistletoe to share a forever kiss with Julia?

http://pelicanbookgroup.com/ec/index.php?main_page=product_info&cPath=37_46&products_id=410
Posted by Donna B at 5:00 AM