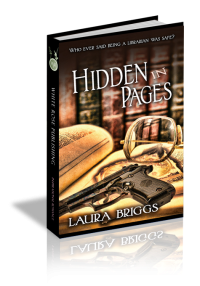 Wow, looks like another great story from Pelican! I hate getting caught by surprise when I check out what's coming and I see one I didn't know about!

I'm not sure, but I think this is her first release with Pelican/White Rose. Maybe she'll stop by and let us know!

Well, here's a peek for those of you who don't go snooping like I do:

Adelle Bradbury doesn’t like adventure—in books or real life. As a quiet librarian who hides behind reading glasses, she doesn’t expect to be swept into a dangerous mission to recover one of the world’s most famous lost treasures. But that’s exactly what happens when a mysterious history buff enlists her help to recover a treasure map—A map he insists is concealed in one of the library’s old books, its contents revealing the secret location of King Solomon’s missing wealth. Suddenly, mild-mannered Adelle is thrust into a world of treasure hunters, secret societies, and thieving profiteers. In a mad dash to protect the treasure, she finds a courage she never expected and something more—the possibility of true love.

“There’s something deadly in the mist,” the elderly woman whispered. “And it keeps anyone from leaving the jungle…alive that is.”

“How exciting.” Adelle Bradbury managed a polite smile as she stamped the due date for Dangerous Mist.

After all, Mrs. Crabel was one of Lindstone Library’s frequent patrons, checking out multiple novels each week.

“Don’t you love adventure stories?” The older woman tapped the cover to the latest D.E. Hensen novel—a rugged hero crawling from plane wreckage in the wild.

“Oh, not me,” Adelle laughed, tucking a strand of blonde hair back in her bun. An unusual style for a woman in her twenties, but Adelle considered it professional. “Jungle fever isn’t really my idea of fun,” she added.

She blushed, remembering her own tame hobby: scouring book fairs for rare copies of her favorite novels. The only event besides church volunteer work on her otherwise blank social calendar.

This love for old books had earned her the nickname of “Marian the Librarian” among her co-workers. That and the fact she saw nothing creepy in the historic library’s gothic architecture, the only staffer who didn’t feel an aura of shuddering romance in its halls.

“See you next week,” she said, returning Mrs. Crabel’s goodbye wave. Slipping on reading glasses, she began the evening task of cataloguing new arrivals. Except instead of hot-off-the-press editions, these came from a private collection, the possessions of one recently deceased Professor Anderson Hymer.

“Pristine volumes,” claimed the woman who donated them, the professor’s secretary, now in charge of dispersing his estate. “He was the only living direct descendant of Blaine Hymer,” she emphasized. “You know—the architect and garden designer behind the Temple Gardens?”

Designed in the late 1800s, the local attraction was renowned the world over for its unique floral landscape patterned after the blueprints to King Solomon’s Temple. Even the hedges and flowers had been coordinated to emphasize the treasure theme, with blossoms in colors of ruby, ivory, and gold.

Curious, Adelle popped the seal on the cardboard box and rummaged through its contents. Faded hardbacks and leather copies, a few nice soft covers. One large clothbound volume with gold lettering caught her eye, Blaine Hymer himself listed as the author.

The Quest for the Temple Gardens was the title emblazoned across the cover in elaborate swirling font. It sounded like an adventure novel, though she suspected it was merely a nonfiction account of Mr. Hymer’s horticultural masterpiece.

The room was quiet, occupied only by herself and Dr. Ravenwood, a kindly, white haired gentleman conducting architectural research in the magazine stacks. He’d visited the library every day this week, often disappearing among the shelves until closing time.

“So many rich sources of study,” he would explain with a hearty chuckle that made her smile. His clipped goatee and neatly pressed suits suggested he might have been a rather dashing figure in his youth.

She could hear him paging through articles even now, his grey flannel jacket visible through an empty slot in one of the shelves.

Five more minutes and she would begin the process of clearing the floors, shutting off lights, and closing blinds. Which was why the trill of the entrance bell inspired an automatic frown. Adelle pictured a pile of overdue books or a college student in need of help for a last-minute paper.

But as she glanced at this newest customer, the usual reprimand froze on her lips.

Dressed in a rumpled evening suit, his tie was loose and trailing with tattered ends. A purple bruise stained his jaw line and his dark hair was tousled in a wild manner, as if fingers had been raked through it both ways.

He all but collapsed against the desk, his gaze roaming wildly around the room before concentrating on her with strange intensity.

“I’m looking for a book,” he began, his tone slightly breathless. “A volume from the 1800s with—” he stopped, gaze lighting up as he spotted the volume in her hands. He reached for it eagerly, his fingers closing around the cover before she could snatch it away.

“Excuse me,” she said, knowing her voice sounded flustered, “but this one isn’t available for customers to check out.” She pulled gently on the book, attempting to dislodge it from his grasp without damaging the fragile binding. His grip tightened in response, his fingers brushing hers in a moment that sent shivers up her spine.

With a gaze that seemed more pleading than threatening, he said, “I don’t want to check it out. I want to buy it. For whatever price you’ll take.”

Was this a joke? Adelle fumbled for an answer amidst her confusion.

“I need this book,” he continued, “and as soon as possible.”


Laura Briggs graduated from a Missouri liberal arts college in 2008 with a Bachelor of Arts degree in English. Since then, she has pursued a career as a freelance writer. Her passion for literature has inspired her to produce a range of online articles on writing and classic authors, as well as her first White Rose romance novel.
Posted by Donna B at 11:44 AM