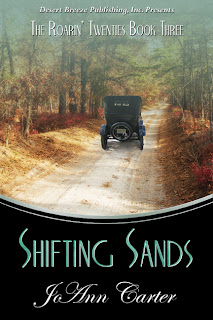 I'm pleased to welcome JoAnn Carter back for a second day, this time with her newest story, Shifting Sands, Book Three of The Roarin' Twenties Series.
I'm amazed, JoAnn, you tell these stories as if you lived in those times. How do you do it?

Thanks, Donna. I'm thrilled that you felt that as you read through the series! If I was able to capture the essence of the era, it's because through my research, I fell in love with the 1920's. Let me tell you a bit about how the series started. My husband’s family was up for a visit and we were doing some fun touristy things in Vermont with them. Mind you, the idea of finding a subject to write about wasn’t even in my thoughts—I was only trying to be a good hostess. Anyway, off we went to visit the Shelburne Museum where a beautiful steamboat, the Ticonderoga, had been restored and on display. As soon as I stepped into this boat, there was a special feel to it. While we walked around I read and soaked up every sign there was expounding on her the history. That's when one fact totally captured my imagination—my mustard seed. In 1923, the first female stewardess was hired. It didn't take long for those “what if questions” to start rolling around in my mind and the concept for THE FLOATING PALACE was born. That tiny seed didn’t stop there though. It has carried this series through all the way to the Pine Barren’s of New Jersey.
History came to life for me like never before as I studied the time period and the folks who lived in them. In my research, I came across the fact that T.B was a huge issue in this era. Wouldn’t you know -- in the township that I grew up in as a child/young adult, Pemberton Township, New Jersey, housed a Sanatorium, Fairview. Coincidence? I’d rather think it was providence. Book Two:Mercies in Disguise, is set right there in the heart of the Pine Barrens.

To wrap up this trilogy, I was visiting my folks, who still live in the Pine Barrens. They invited me to go to the annual blueberry festival held at Whitesbog in Browns Mills, NJ. I drove down the windy, dirt road that led there, took one look at the restored village building, and my heart sped up. I felt as if I were right there in the 1920's, looking through Dede, the main character’s eyes. That was it – mustard seed 3 -- the perfect place for the last book, Shifting Sands.

Hey, do me a favor okay? If you are reading this post and are a newbie to this writing stuff and have a thought or a seed and that grows into a story, let me know. I’d love to hear about it!
Wow, those are quite the seeds! Well, let's share what it's all about.

Blurb:
Dede White is going to shut down the Fairview sanatorium, no matter what. Her beloved aunt died because of doctors like James Riley and she’s not going to let him trifle with any more lives. But -- James Riley isn’t what she thinks. Unfortunately, Dede doesn’t figure this out until she’s done her best to shut his sanatorium down. She might not be able to repair the damage she’s done, and even if she is, will he be able to love her back?
Excerpt:
Timber crackled. Orange, yellow and blue flames leaped through the windowsills and pulsated from the rooftop of the Fairview sanatorium. A line of people with buckets of water worked frantically, yet a stream of thick, heavy smoke that made her throat feel as if it were closing, was all the reward they seemed to garner. She raised her hanky to her nose. Was it the stench or the smoke making her stomach feel queasy?
The fire chief shouted to be heard over the noise of the flames. "Get that pumper over here now."
Firemen dodged around her with a thick hose. One bumped into her and she quickened her pace to get out of the way. She desperately wanted to help, but how? Dede scanned the area and neared a group of people clustered together on the edge of the property. Some were crying, others screaming and the rest stood staring at the burning building.
She sent up a quick prayer for the residents' and the firemen's safety, as the emergency personnel continued their efforts on quelling the fire. Why she bothered to pray she had no idea. God didn't seem to listen to her prayers or if He did, chose not to answer them.
She noticed a slightly familiar face in the crowd, yet she couldn't recall from where. She watched him walk up to another tall man in a long, white, soot stained lab coat, no doubt a doctor. A shudder ran down her spine. Like prayer, this was another lesson she learned from the school of hard knocks -- doctors and surgeons didn't always help people. As far as she was concerned, medical professionals could only be trusted about as far as one could throw them -- or less.
Dede sighed and squared her shoulders. Striding forward, she focused on the man she was sure she'd seen before. Ah, yes it's Stanley from the Pig' N Whistle.
Stanley's voice carried above the din. "Dr. Riley, I'm Stanley Fisher, a friend of Abigail Madison, one of your patients. She told me you needed help with transport."
"We do." Dr. Riley looked back to the patient he had been speaking to before Stanley caught his attention. "Please excuse me a moment while I speak to this gentleman." He stepped away and motioned Stanley to follow. "How much room do you have in your vehicle?"
"Quite a bit. I have the carriage the hotel uses to pick up patrons at the train station."
"Excellent. We'll move the most critical first. Nurse Anna can help with that. She has a triage list." He waved to a woman in a blue uniform to join them.
Dede took a deep breath. It's now or never. She took the remaining few steps until she stood in front of the handsome doctor, who was at least a full foot taller than her five-foot-one stature. Craning her neck back, she looked into his lean face. Hazel eyes held hers for a second. Suddenly, the sounds of the fire and people melted away. She could only hear the pounding of her heart in her ears. An awareness, or was it fear, zinged through her. She hated the thought that she could be afraid of a mere man. But he wasn't just a man; he was a doctor.
She blinked and tried to refocus. His brown hair was clipped short, but a few bangs managed to slip forward and a line of soot followed the length of his cheekbone. At least his mussed appearance made him look a bit more approachable -- more human. She blurted. "I want to help, too. I have a car here as well."
He nodded. "Fine. Fine."
After Nurse Anna made it through the maze of people, the doctor said, "These two have offered to help with transport. Please follow them and see what room they have available in their vehicles. Send the most critical to the Birmingham Inn where they offered us temporary housing."
The nurse nodded. "Yes, Doctor."
When the doctor glanced at Dede again, she noticed how worry weighed his mouth down into a frown. Perhaps all doctors weren't as ruthless as she made them out to be. Then again, she'd lost so much. She needed a lot more than a show of concern during a fire to prove they weren't all savages after what happened to her aunt.
He nodded toward her and Stanley, oblivious to the emotional tug-of-war she faced. "Thank you."
The doctor took off towards his patients and she followed the nurse. Granted, she couldn't do anything to help her aunt now, but she could do something to get these poor folks out of the cold and smoke.
Review:
Dede is such a strong character. She's the kind of friend you want to have on your side in the hardest times. And although she has misjudged Dr. Riley, and unfairly wronged him, she can't help the admiration and strong feelings she develops for the real Dr. Riley, not her imagined enemy.

Ms. Carter tells this story as if she lived in those times. Very well done!
Shifting Sands can be found at:
Amazon: http://www.amazon.com/Roarin-Twenties-Book-Three-ebook/dp/B0098TB2TW/ref=sr_1_fkmr0_1?ie=UTF8&qid=1347372797&sr=8-1-fkmr0&keywords=Shifting+Sands+by+JoAnn+Carter
Desert Breeze Publishing:http://stores.desertbreezepublishing.com/-strse-340/The-Roarin'-Twenties-Book/Detail.bok
All Romance Ebooks: https://www.allromanceebooks.com/product-theroarin039twentiesbookthree-939477-151.html

JoAnn Carter writes stories that will encourage your faith through her inspirational romances. She resides in Vermont with her wonderful husband and four children. JoAnn is available for speaking engagements to book clubs, reader groups, library groups, women's ministry events, school events and church retreats. You can visit her webpage @

http://home.comcast.net/~jo.glenncarter/site/
Posted by Donna B at 11:38 PM