A Christmas Bonus by Patty Froese 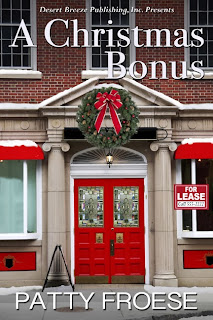 
A Christmas Bonus
by Patty Froese.

Welcome Patty! What a wonderful story!


When Millie's boss asks her to work over Christmas, she's hesitant to give him any more overtime. She has plans for her life that include quitting this job and starting her own photography business, and she promises herself to quit by New Years.

Andrew Holmes has no desire to go back to his tiny hometown for the holidays, but his manipulative grandfather gives him an ultimatum that he just can't refuse. So in order to get the last project of the year finished in time, he asks his assistant, Millie, to make the trip with him.

With a disgruntled brother, a sister-in-law struggling with infertility and a little boy who shows up claiming that one of the Holmes men is his father, Christmas is about to get complicated...

"So, Millie says she'd like to stay," Andrew announced.

"Good." Louise shot her a smile. "Do you like fruitcake, Millie?"

"I think so." Mille sank into a seat next to her boss.

"Me, too..." Louise disappeared into the fridge, her voice meandering out from the chilly depths.
"Except I always hate the fruit in it. So I just make the cake. But the cake is rather dry."

"It's more like a Christmas cracker," Andrew murmured, and Millie repressed a laugh.

The dense, dry confection that landed with a heavy thud on the tabletop looked nothing like the fruitcake she'd seen in the past.

"Guests first." Louise announced cheerfully, and when Millie shot Andrew a "help me" look, he pointed under the table.

The dog? So far, Millie hadn't seen a dog in the house, and when she slowly raised the plastic tablecloth to peer under the table, she was met with the biggest canine face she'd ever seen in her life. Stifling a yelp of shock, she turned her ashen face towards Andrew.

He nodded. "Get used to him." When she turned her attention to the plate deposited in front of her, Andrew leaned in and murmured in her ear. "Thanks for coming, by the way."

What a great story! I actually felt like I went home with Millie and Andrew and walked right into that crazy mixed up family with them. Between Andrew being uncertain of Millie, Millie thinking she knew what she wanted from life up until now, Andrew's brother and his wife with their problems, and all of it going on under the eyes of his parents and grandpa...this is one crazy mixed up lovable family, just like in real life. There are some light moments and some heart tugging ones, too.

You'll certainly enjoy the twists and turns in this one. 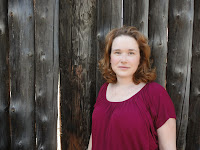 Patty Froese writes from Alberta, Canada, where the winters are long and cold. This suits her just fine, since it gives her plenty of time to write and she can enjoy the snow from the right side of the window. She has her degree in English Literature and has written in other genres, but she particularly enjoys writing romance.

http://pattyfroese.com
Posted by Donna B at 4:00 AM