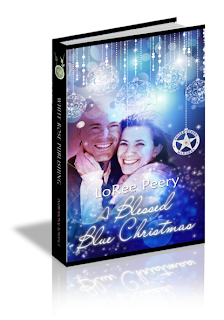 Day 8 of Christmas stories, and still many more to come!!!

Welcome back, LoRee. So nice to have you here once again. And as usual, I love your story!

Dahlia Delisi has poured her life into her store, The Blue Dahlia. Once, her faith was strong, and her life was on a different course. But when Sloan Letheby left town, Dahlia drifted from God.

Sloan Letheby has been transformed. His brush with death brought new meaning to his faith in God, and he needs to right old wrongs. However, there's a murder plot in the way of his reunion with Dahlia. Can he find a killer before it's too late? And can Dahlia accept him...and God, back into her life?

“We should make this official,” he said, unhurried. Sloan pulled aside his charcoal blazer to reveal the star belted at his waist. Then he sank into the corner, dropping an ankle over a knee where he rested his hat.

“Please state your business.” She finally met his gaze and swallowed the dryness gathering in her throat. “Can’t imagine why you’re here.”

“There is no delicate way to jump into the reason. Do you know a man named Rusty Ewing?”

“He’s under investigation. One of his past acquaintances is Carrie Delisi, from when she worked at Hickman’s Trackside Bar.”

“We’re so glad she doesn’t work at that bar any longer. Carrie is married to my brother. You remember Ken.”

“Of course I remember Ken. You’re only a year apart and you once told me the two of you grew up almost as close as twins.”

“That’s right. What’s this all about?”

“Ewing is into criminal activity. He’s reported to frequent that establishment in Willow, where he kept company with your sister-in-law. We haven’t yet figured out in what capacity. I understand she works for you now. Since you’re around her, has she ever mentioned his name, or have you noticed her make any suspicious phone calls?”

“As I said, I’ve never heard of the man. Most of our conversations are about family, the shop, and lately, our plans to help Mom redecorate Willow’s Main Street for Christmas.” Dahlia stood and led him to the front, where she stopped next to a customer at a display counter of beaded handbags.

When Sloan turned, Dahlia couldn’t prevent the gasp that escaped. A six-inch long, jagged scar in the shape of a seven marred the smooth skin on the back of his head.

He swung back at the sound. She took two steps forward.

“Sorry,” he said. Their eyes locked. “I forget it’s there. Hair doesn’t grow where the graft was, so it’s easier to keep it shaved.”

“Goes with the job.” He boldly surveyed the boutique and tipped his hat. “I like this place, so much blue. The name becomes you, Dahlia.”

Her name rolling off his tongue erased images of what nasty weapon could have caused such an injury to his head. He made it sound like an old endearment. Pleasure shot awareness through her system. She refused to heed her reaction and hid it from him. “Thank you. Will you let me know what you discover?”

He slipped a business card into her hand. “Have Carrie call me when she comes in. Considering my line of work, this needs to be kept under wraps.”

The brush of his fingers danced to the inside of her wrist, where her heartbeat pulsed.
He gave her fingers a quick squeeze. “You look mighty fine in your blue boutique. I’m happy life turned out good for you.”

She pulled her hand from his, pushing away thoughts of a time when her life was all about him. And the forever they’d planned. She rolled the card between her fingers. “Thanks, again. But I am certain Carrie won’t be able to help when she calls you.”

“You never know, considering. Say hello to Ken and your parents for me, Dahlia.”

What if she hadn’t resisted his tug on her fingers? Tingles still radiated up the inside of her arm at the memory of his touch. She imagined the brush of his lips against the underside of her wrist, his signature touch going back to their first time together.

And his whispered words at her door that night, “I’ll always remember this night, and the way you felt in my arms.”

The jangling ding of the door closing on “Fa la la la la la” playing from speakers outside jerked her back to the here and now.

Sloan settled his hat, adjusted the collar of his jacket so it rose higher on the back of his neck, and walked into the darkening December evening.

Dahlia followed his movements. Memories flooded her mind. He hadn’t asked if there was a significant other in her life. Did he have a special woman in his?

They’d both wanted to see each other more away from school that second semester. But she’d been wrapped up in youth group at church in Lincoln and violin lessons. He spent most of his hours outside school training for cross-country before and after school whenever the weather allowed.

She glued her attention to his retreating physique. He paused on the walk and swiveled his head to take in his surroundings. What prompted Sloan to scratch the scar on his head, jostling his hat and tilting the brim just so? Habit? Ever the track star, he snapped open his phone and pressed his key fob on the way, racing towards his car now, eating up the yards. He drove one-handed out of the parking lot, buckling his belt when he hit the street.
She’d watched him leave one other time. She could almost feel the heat of summer between their senior year and college. He’d moved away to go to school in the East. She’d traveled west to college. A few phone calls once they got settled that fall had been their only connection. For some reason, they’d missed each other over Christmas break. Once settled back in her college dorm, she’d known her interlude with Sloan had ended.
That didn’t mean he hadn’t been constantly on her mind. She continued to doodle hearts and scribble Mrs. Dahlia Letheby in her college freshman notebook instead of doing Bible study. She’d wanted it all. Her dreams had been filled with Sloan and their life together. She waited for his call and continued to plan their life. A life that would begin with the flowing, long-trained white wedding gown she’d designed on paper. She’d imagined their life together after college, followed by their babies.

Dahlia shook her head at such girlish notions.

Their forever had fizzled.

She’d been doing just fine on her own, knowing what to expect of herself. And rarely had she needed anyone else.

What about the Lord?

God wasn’t the same to her today. He had been real once. She’d viewed Him through the eyes of a child. Sure, she still believed. No one but the one true God could have created the world, and the entrance of Baby Jesus into the world was about to be celebrated.

But He’d let her down by not making her dream with Sloan come true. And she’d begged for something else that hadn’t happened. She showed the window her back. Her customers needed her.

Life doesn’t turn out the way we imagined or wanted. My life is The Blue Dahlia now.

Another wonderful Christmas story! I love stories with strong female characters, and Dahlia is definitely one of those. She's built up a business on her own after losing her faith in not just people, but in God. She's worked hard to stand on her own after her losses.

Then Sloan steps back into her life, and he is definitely on a mission. He has to deal with business first, but then he's determined to teach her to trust once again.

It's beautiful watching her faith reemerge.