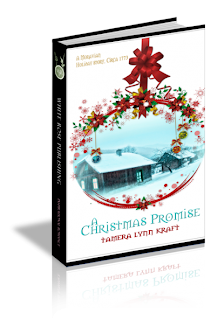 Here's another promising gift for under the tree, or in a stocking, or just to set the mood...

During colonial times, John and Anna settle in an Ohio village to become Moravian missionaries to the Lenape. When John is called away two days before Christmast to help at another settlement, he promises he’ll be back by Christmas Day.

When he doesn’t show up, Anna works hard to not fear the worst while she provides her children with a traditional Moravian Christmas.

Through it all, she discovers a Christmas promise that will give her the peace she craves.

The door flew open, and the burst of frigid air chilled the room and blew out one of the candles.

John stepped inside with a recent Lenape convert who had been baptized under the name Paul. Anna was glad the man had converted. Brother Paul was six feet tall and built like a tree.

Her husband was almost as tall and as broad across the shoulders, with a pleasant look that seemed to want to break into a smile at the slightest provocation. John’s strength helped her feel safe, as if being wrapped in a warm blanket. Even though she’d lived among Lenape most of her life, Brother Paul scared her.

Belinda and Lisel ran to their father and gave him a tight embrace. Katrina tugged on his trouser leg until he picked her up and ran a hand through her brown ringlets. Katrina was the only one of their children who favored Anna.

“Papa,” Belinda said. “I’m writing Scriptures to hang on the tree, and I helped Mama with the buns for the feast. We’re almost ready.”

John hugged his oldest girl. “You’re such a blessing to your mama.” He said the words in English, which was odd. They spoke Lenape when natives were around, especially ones who hadn’t learned English. John would normally remind the girls to speak Lenape when they had a guest.

“I helped, too.” Lisel allowed her lower lip to almost reach her chin.

“Of course, you do.” John set Katrina on the dirt floor.

“Children.” Anna grabbed hold of Katrina’s hand. “Give your father an opportunity to settle. Why don’t you work on the Putz?”

Lisel clapped her hands together, and the girls gathered near the blazing fire where pinecones, cloth, and papers lay in a wicker basket. The children would make figures out of them depicting the Nativity, the wise men, and the Exodus from Egypt. John had already whittled a small manger. Katrina, as the youngest, would place the pinecone baby Jesus in it on Christmas Eve after the Lovefeast.

Anna tucked a stray curl into her Habba, turned to Paul, and spoke Lenape to welcome him. “Nulelìntàm èli paan. May I serve you anything—coffee, water?”

Brother Paul shook his head. He wore a grey shirt and trousers, a buckskin coat similar to her husband’s, and had shaved his Mohawk. But when he crossed his arms and leaned against the door post, he looked as intimidating as when he wore black and red paint around his eyes, and dressed like a warrior.

“We’ll need ashcakes.” John now spoke in Lenape. His Adam’s apple bulged as he grabbed the musket hanging on the wall over the fireplace. “And a couple canteens of water.”

Anna wrapped the cornmeal ashcakes in a cloth and poured water from the pitcher into the wooden canteens. “I kept some stew warm for you. Do you and Brother Paul have time to sup before your journey?”

“No, we must make haste.” John glanced out the window. “It’s already dark. We need to arrive at Gnadenhutten before it gets too late.”

She motioned John to the corner of the cabin, and whispered so the girls wouldn’t be alarmed. “Something’s wrong.”

“A delegation from a nearby Lenape tribe arrived at Gnadenhutten. They have requested to meet with leaders from both of our villages.” John touched her arm. “Don’t be troubled. They mean no harm. They only want to know more about what we’re preaching.”

Anna’s stomach knotted. “Is there any danger?”

“You fret too much.” A smile played with the edges of John’s mouth. But that’s all it did. “They only want to converse, nothing more.”

“How many will accompany you?”

Her shoulders relaxed. Luke had been a trusted native helper to the Moravians since his youth. They’d known him for years in Pennsylvania. But Paul showed up at the village a few months ago.

“Why must you go?” Anna wrapped her arms around John. “You have responsibilities to your family. Let somebody without a wife and children take your place.”

John hugged her for a moment, and then pulled back to tilt her chin towards him. The lighthearted facade had been replaced by an intense gaze. “We came here to advance the Kingdom of God. Shall I pull back now?”

Anna wiped away the stray tear rolling down her cheek. “May the Lamb that was slain receive the reward of His suffering.” She said the words in Lenape to reassure him, but they didn’t make her feel any better.

“Amen.” Brother Paul stepped over to them and put a hand on John’s shoulder. “Brother, we must go now.”

Anna swallowed back the lump in her throat and spoke in English. It seemed too intimate a moment with her husband to let Paul understand her words. “Will you be home in time for the Lovefeast tomorrow night?”

“You can’t miss the celebration of the birth of our Savior.”

“I’ll try to be back in time.” John’s jaw twitched. “I promise to be home for Christmas.”

Anna wanted to argue with him, tell him not to go, but it wouldn’t do any good. She forced her breathing to slow to a normal pace. “Then I’ll make it the best we ever had.”

“That won’t be hard,” John said. “Any Christmas with you and the girls is good.”

“I’ll meet you outside.”

The door made a thumping sound as Paul closed it on the way out.

The girls ran to their father and hugged him.

“When will you be back?” Belinda asked.

“Maybe tomorrow in time for the Lovefeast.” John wiped his hand across his neck. “If not, I’ll see you Christmas Day.”

John took Anna into his arms once again and kissed her. The heat of the moment swept through her as she leaned into the kiss with parted lips. He rested his mouth against her neck, and then pulled away. After strapping on his supplies and musket, he opened the door.

The blast of winter filled the cabin and sent a chill through her. She scampered to the fireplace, grabbed her ladle, and dished stew onto tin plates. “Children, come to the table to sup.” The door shut with a dull thud behind her.


Tamera leads Revival Fire for Kids where she mentors other children’s leaders, teaches workshops, and is a children’s ministry consultant and children’s evangelist. She has curriculum published and is a recipient of the 2007 National Children’s Leaders Association Shepherd’s Cup for lifetime achievement in children’s ministry. You can contact Tamera at http://tameralynnkraft.com and http://revivalfire4kids.com
Posted by Donna B at 5:00 AM