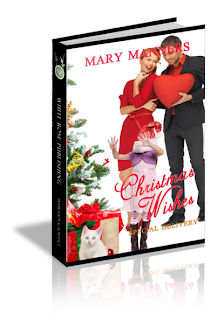 Today I'm happy to welcome back Mary Manners, and as usual, I love the story! Better keep a box of tissues handy when you read this one though!

When attorney Riley Harper comes home to Maple Ridge following the death of his grandfather, the last thing he expects to find is Kaylee McKenna living in his grandparents' guesthouse. Though he and Kaylee were once best friends, Riley cannot find it in his heart to forgive her for the death of his mother. His heart, full of bitterness and resentment, has room for little else.

Kaylee has no time to dwell on events of the past, especially where Riley's concerned; she's too busy raising her six-year-old niece, Rosie, and working as an ER nurse. With Christmas quickly approaching, her days are spent helping with charity events and filling the wishes on Rosie's Christmas list.

But when Rosie's father makes an unexpected visit, Kaylee must call on Riley's legal expertise to ensure Rosie of a safe and secure future. Will Rosie's special Christmas wish heal Riley's damaged heart and bind the trio together as a forever-family?

Riley dropped his duffel bag and stepped over to the hearth to toss a log on the fire and stoke the flames. The tinderbox was full, and he wondered how Gran managed to stock it on her own, with her ever increasing flare-ups of arthritis. Guilt tugged again that
he’d stayed so absent, for so long, as he wound his way toward the kitchen, where laughter mingled with Christmas music and that little girl’s chatter once again. His curiosity piqued, he wondered who Gran had for company. Most likely someone from church. As he neared the doorway, Moose sauntered out, blocking his path. The mild-tempered golden Saint Bernard had always been a better lug nut than a guard dog so much for home security.

"Hey, buddy." Riley dropped to his knees, wrapping his arms around the loveable mutt. His
muzzle was sprinkled with a touch of salt-white, marking his advancing age, and he moved just a bit slower than Riley remembered. "How’ve you been?"

Moose nestled against him as if it had been decades instead of months—now closing in on a year—since the last time they’d seen each other, pushing his meaty jowls into Riley’s chest. The burly mutt wore a generous red velvet ribbon, tied into a large bow at the top, around his neck. It was adorned with an oversized jingle bell that chimed as Riley gave him a good rub.

"Yeah, it’s great to see you, too. Have you been taking good care of Gran?" Riley smoothed a hand down Moose’s massive back, burying his fingers in the bristly fur. "You look ready for Christmas. It smells like Christmas around here, too. What’s Gran got baking in the kitchen?"

Moose turned back toward the doorway, his tail thumping against the floor as his head cocked to the side as if to say, "Follow me‚ I’m on it." Riley stood to flank him as the dog
lumbered forward. "Smells like something good to eat. Maybe Gran made enough for all of us. Let’s go see what's up."
Review:

This is such a sweet story! You will fall in love with all of them! Riley, his grandma, Kaylee and Rosie are all so sweet I want to have them all over to my house for Christmas! And Moose! He is precious! There's just something about a big old lumbering dog who lets a kid climb all over him that makes me sigh. Sweet!

This story is full of heart. From Riley's regrets, to Kaylee's loss and regrets your heart will want to wrap around them both and just hold them. And Rosie is just the most precious child! This is the sweetest Christmas story I've read this season!