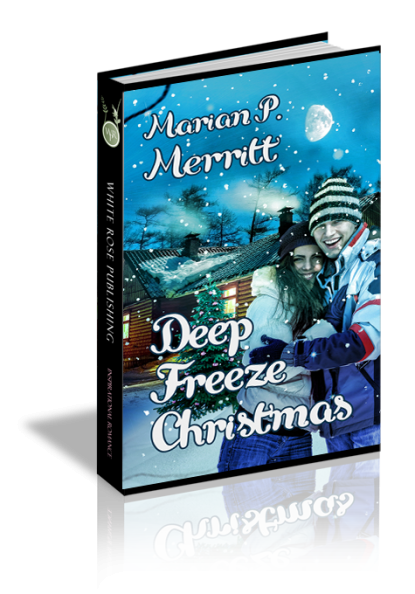 You guessed it, another Christmas story...'tis the season after all!

Louisiana Chef Leona Buquet agrees to cook at a Colorado mountain lodge during the Christmas holiday. When she meets the son of a movie producer, she is taken by his striking good looks and warm personality. Trouble is, with glamorous actresses clamoring for his attention, why would he even notice Leona?

Cameron Fleming struggles with being in a career he hates in order to please his famous father. When he meets Leona, he feels a connection to her and wants an opportunity to get to know her. That is hard to do while dodging starlets…and the woman he wants is avoiding him.

Can love sizzle, along with the Cajun dishes, in subzero temperatures?

"Ready to cook some good Cajun food for some wealthy people?" Chef Julian's thick Cajun accent sailed through the thin air while he tried to catch his breath.

"I'm always ready to cook good Cajun food." Leona gasped for air as well. They weren't accustomed to the thin air at these high elevations. After all, in New Orleans, they lived below sea level. She hefted her bag onto her shoulder and entered the lodge.

The commanding entryway loomed above with massive log beams and a large chandelier of intertwined elk horns.

"Julian, I see you made it." A silver-haired man greeted them. Julian's friend, she suspected. His blue eyes sparkled in the natural light streaming through the twenty-foot wall of windows.

"CG." Julian extended his hand. "It's good to see you again." He turned toward Leona. "This is my Sous Chef, Leona Buquet."

"Miss Buquet. CG Fleming." He extended his hand for Leona to shake. "Welcome to my mountain home." He pointed down a long corridor. "The kitchen is down here." He guided them down the hallway where watercolor paintings of elk, deer, rainbow trout, and bear covered the walls.

The gourmet kitchen sported the finest stainless steel appliances and more than adequate counter space. Granite countertops covered a small bar with leather stools circling the opposite side. "Wow, it will be a joy to work in this kitchen," Leona said.

Julian looked around and snickered. "It'll do."

"I see you haven't changed much. Mr. Grinch." CG smiled.

Julian grinned. "Wouldn't want to disappoint." He plopped the bag holding their kitchen gear onto the counter. "Is our food shipment here?"

"Yes, it's been placed in the freezer room and the fresher items will be delivered later today. If you follow me, I'll show you to your rooms."

"No she can't come this year." CG's smile faded and a flash of sorrow crossed his eyes. "Her best friend from college is ill, so she's flown to be by her side for Christmas." He turned to Leona. "Carletta is my wife and the person who has kept me on the straight and narrow for almost forty years."

"Yeah, his better half." Julian stared at CG. "Everyt'ing OK between you two?"

"Well, give her my love and tell her I'm sorry I missed her."

CG led them out of the kitchen and to the massive stairs in the living room. They climbed to the second floor. Each step was a large log cut in half. Once upstairs, wide pine planks covered the floor of the expansive hallway that ran along the west side of the house in both the north and south wings. They stopped at the end of the North hallway. He opened the door on the east side. "Miss Buquet, this is your room. Julian you're across the way. I'll let you freshen up. If you need anything, I'll be downstairs. The housekeeper, Mrs. McCaffrey, can also help you. She'll be here later today."

Leona entered her room and placed her suitcase on the holder next to the log post bed. The multicolored quilt of burgundy, green, blue, and cream-colored squares covering the bed matched the curtains, and a hanging miniature version adorned the wall above the bed.

She peered out the window. The view took her breath. The snow-covered peak towered above the lodge with deep green Douglas fir dotting its base. Several pines grew near her window, their branches reaching out toward the lodge. The pristine snow covered the ground and sparkled in the midday sun. A river, frozen on the sides, flowed along the curves and over large boulders.

She took in the sight and then jotted a few notes in her journal. When she described CG on her pages, there was something about him—something familiar. She'd have to ask Julian how he knew him. Once she’d freshened up and changed, she met Julian down in the kitchen.

"How many are we feeding?" she asked.

Julian reviewed the guest list and counted off the names. "It looks like five guests, CG, his son, Cameron, and the housekeeper, Mrs. McCaffery. So with us two, that's ten mouths to feed every day. Three meals. You up for it?"

"Am I up for it? Really, Chef? This is a dream job chefs live for."

He grinned. "Oh yeah, over a week of isolation, cold weather, cookin' in the Rocky Mountains for a bunch of spoiled rich people. Dat's a dream, all right."

"C'mon, Chef, tell me how you really feel." Leona began unpacking their gear and placing the items where they would find them for dinner tonight. "Why'd you take this job if you don't want to do this?"

"Because I've known CG for over twenty years, and he's been a good friend. I couldn't say no when he asked." His tone softened. Chef Julian opened the glass doors and began rearranging the items in the refrigerator. "Besides he's not a spoiled brat rich dude, and he's paying us a boatload of money. I can get that new ice cream maker we talked about and a few other things for the restaurant. And you, my dear, will be a few thousand closer to getting your own restaurant."