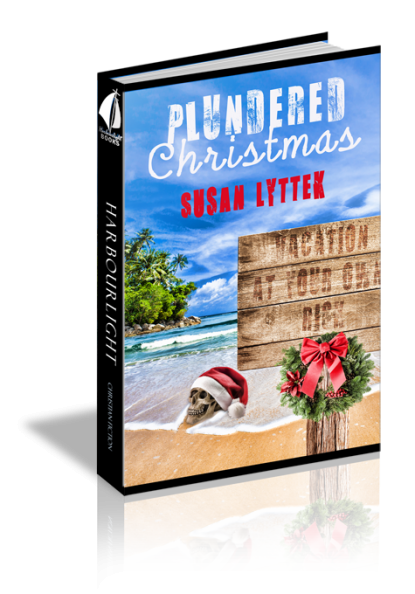 Compelled to spend Christmas on a private island with her father's future bride and her family, Jeanine learns that Margo Banet is descended from a pirate queen.

Relatives and friends all have their reasons for attending the festivities--including the legendary treasure. But when Margo's nephew winds up dead and a violent storm cuts them off from the mainland, Jeanine has to wonder if they will solve the mystery before someone else dies trying.

I love Christmas. I adore Christmas. I start getting ready for the next Christmas right after the last one finishes. I am one of the first people you will find at the day after Christmas sales stocking up for next year. Christmas is my absolute favorite day of the year, and I wish I could make it last for a week at least.

Nevertheless, I didn’t love this one. And I couldn’t wait to escape it.

In the first place, it didn’t feel much like Christmas. Christmas, to me, meant Dad’s house with the fire roaring, a tree twinkling, and so many lights that the electric company writes him thank-you letters when he pays his bill in January. Or it meant the quieter Christmas at Mom and Dad Talbott’s with carols playing softly in the background, the persistent aroma of her secret gingerbread recipe, and a tree cut fresh from their back forty.

It did not mean eighty degrees, pirate legends, and a dead body. No. It definitely did not mean any of those things.

I’m getting way ahead of myself. But I do that. It’s a sign that maybe, just maybe, I’ve had too much coffee.

Nah. James, my sweetheart of an Army captain, says I love it too much, but honestly, I can’t believe that the words “too much coffee” could ever apply to me, Jeanine Adorabelle Talbott.

Too much mystery? Definitely.

Since James and I moved to Gentle Springs last year, mystery has plagued us. First, it was that treasure hunter killed in the cemetery next door. Then, when Justin, Josie, and I went up north for a field trip with our homeschool co-op, our tour guide became a victim of manslaughter. Now here.

That kind of track record is great for books and movies, but not for me. Speaking of track records, this is now three for three that soccer had something to do with our involvement. Maybe I should encourage Justin to find another sport. He is getting awfully good at tae kwon do. But that wouldn’t be fair to the Hornets. He is the best eleven-year-old goalie in the entire county.

I’m going to take a deep breath and start at the beginning...

This Christmas actually began back in June. In honor of Justin’s eleventh birthday, my dad invited Justin to accompany him and his bowling buddies to Virginia Beach for three days. James and I encouraged Justin to go because he was down in the dumps and needed a boost. His soccer team had only come in second place.

We were rejoicing about second place. They had played well and beaten some tough teams to achieve it, but since he’d come in first with his team in Georgia the year prior, he expected more of the same.

“The Hornets are way better than my last team, Mom. It doesn’t make sense that we came in second. We should have won.” Justin grumbled.

“Older players, sweetie, and a different league. You guys did great. Maybe next year you’ll get the first place you want. It was close between you and the Wolverines.”

“Maybe or maybe we’ll get third. The Knights were really good, too.”

How do you convince an almost-eleven-year-old that life is good after he tastes defeat? We didn’t know. That’s why we sent him to the beach with grandpa.

It seemed to work. He came back full of tales about the miniature clear crabs he dug out of the sand, and the little crab shack restaurant that Hank, Dad’s oldest friend and league partner, knew of with the best and freshest food. “You ought to have seen the pile of shells we made!”

In all the rave reviews about the vacation, there was one thing Justin didn’t like. His grandpa came home from the trip with a girlfriend.

“And it was all my fault, too! If I hadn’t been dribbling up and down the beach while they snoozed, we never would have met her.” Again, he grumbled.

Turns out, the gentle breeze off the ocean and the warm early summer sun had knocked out the bowling buddies. Dad insisted he was awake and reading, but I know his time window between reading a page and snoring can be extraordinarily short in the right circumstances. Justin, tired of just sitting in the sun, picked up his soccer ball and headed down the beach. The rule was that he had to be able to see “the guys” at all times.

Keeping one eye on his chaperones distracted my dribbling goalie. The ball hit too far back on the side of his foot and careened wildly—right into the side of a woman’s head.

Justin said she had on clothes too fancy for the beach and had walked right out of one of the poshier hotel complexes. It didn’t take her long to find the sheepish looking culprit. She picked up the offending ball, marched over to Justin and demanded to see his parents.

“I’m here with my grandfather,” Justin admitted, pointing to the line of reclined beach chairs.

She marched over to Dad, where she laid into him for neglecting his grandson and causing her bodily harm. Evidently, she used a lot of legalese. Dad, after nearly thirty years as a practicing lawyer understood every word. In addition, he dished it right back, telling her he could pull her in for unlawful possession of a soccer ball and some other such nonsense. Justin said he didn’t pay attention to much of it. He kept noticing how much, in her face, the woman looked like Grandma.

That detail obviously didn’t escape my father, because after Dad asked Justin to apologize he asked the woman out to dinner.

http://pelicanbookgroup.com/ec/index.php?main_page=product_info&cPath=68_64&products_id=630
Posted by Donna B at 10:00 PM